By News Staff on March 20, 2014 in Government Agencies/Utilities 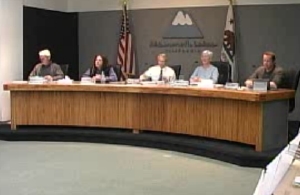 Mammoth Town Council members held their ground on their views of a pay raise for the Council. Their not so fabulous pay of $300 per month is set in Government Code but does allow a 5% increase annually. The Council never did vote in those raises for the past 29 years. On a 3 to 2 vote, the Council will make $735 per month. They also enjoy health benefits.

At their last meeting, Council members Matthew Lehman, Michael Raimondo and Jo Bacon made it clear that they supported the raise to help the not so wealthy have more incentive to run for office and, at least, not lose money. Councilmen John Eastman and Rick Wood strongly opposed the raise saying the timing was wrong and people do not run for Council for the money.

At the most recent meeting, Councilman Eastman said he respected his colleagues but said he felt strongly about not granting a pay raise. He said the bad snow year could mean a $1 million shortfall. Said Eastman, “We struggled to fund Whitmore and the Fourth of July.” He said on one hand, the Council asked for employees to make sacrifices and on the other hand now want a 245% salary increase. Delay this, he said, until Town government stabilizes.

Councilwoman Jo Bacon said budget plans include use of $385,000 from the Reserve for Economic Uncertainty, not $1 million. Since the Town incorporated, she said, the Consumer Price Index has gone up. She said she serves on Council for the challenge but others may need more pay to “run for the crazy job.”

Michael Raimondo said the pay raise would help future candidates. Matthew Lehman said he respected all that was said. Mayor Rick Wood said the raise made no sense and that candidates are not running for the money. Rich McAteer commented that he did not object to the Council pay raise and that candidates will be shocked at how much time the job takes. Council Candidate Cleland Hoff called the Council decision a tough one.

As expected, Lehman, Bacon and Raimondo voted yes. Eastman and Wood voted no. The pay raise goes into effect July 1 or upon seating of the new Council, whichever is later.

While your at it B.K. will you also check other same size town compensations for council members in California apples to apples, instead of the apples to oranges comparison?

Will you also opt out of receiving a cash stipend in lieu of health insurance?

Hi guys, I’m glad to see your posts. I spoke up at the meeting because what the Council had to vote on was my one political nightmare. I wouldn’t vote myself a raise. However, the time commitment and energy now needed to serve on Town Council is unreasonable and I… Read more »

Wrong time, wrong place. How these three council members can lead a city that is heavily in debt, has cut positions, has decimated their police department and then see clear to vote themselves a BIG FAT RAISE is beyond me. This is one the poorest examples of leadership I have… Read more »

“Mayor Rick Wood said the raise made no sense and that candidates are not running for the money.”

I have to agree and with that I don’t see TOML ever being run as well as it should.

I don’t think you can accumulate the raises. It’s 29 years of 5% per year.
BK

Benett, Could you clarify for me? The council currently makes $3600 a year. They will now make $8820 a year. Obviously this more than doubles their salary. Does the code allow them to go back all those years they did not take a raise and add them up and take… Read more »

With the raise and medical benefits for them and family how much is the compensation package per month for a couple of meetings?

“The wealthy business owners are pissing on us and the towns media tells us it’s raining”.

The Town Manager said the average health insurance benefit is $17,000 per year per council member. Now, the monthly pay is $735.
BK

Does the average town taxpayer have the ability to vote themselves a TBID TAX or earn a generous taxpayer funded compensation package by a majority vote of three plutocrats? Why do we pay for their and family medical coverage of the wealthiest among us for part time work? These same… Read more »

Cleland Hoff just said in the press she threw up in her mouth a little bit (paraphrasing here) after she read the schedule the council members have, with multiple meetings, commissions, volunteering and a host of other time wasters. She was shocked over the amount of time it takes to… Read more »

Closer to $2100 a month per council member a month total cost to the taxpayers.

Where is bureaucrat beat now?

It’s good to be the boss!

They could of put their money where their mouth is and voted for the new elected members of town council in 2016 to receive the raise . Oink,Oink, every time I see one of these swines around town. Anyone who knows the core values of these characters, also knows their… Read more »