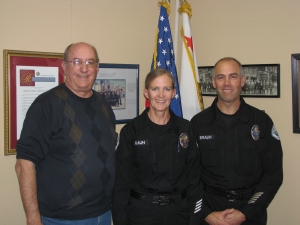 Mammoth Police Chief with Ingrid and Mike Braun when they were sworn in as Reserve Officers.

Early last year, former Los Angeles Police Department officer Ingrid Braun, who lives in Mammoth Lakes, had gone to work for the Mono County Sheriff’s Department. The deputy who trained her rated her above average, but Sheriff Ralph Obenberger terminated her one week before her probation period ended. Now, Braun has taken out petitions to run against Obenberger for Mono Sheriff.

Braun worked 21 years at the LAPD and retired as a Lieutenant. She worked as a watch commander, head of a gang and narcotics’ unit, an investigator and supervisor of an Internal Affairs unit and other tasks. Braun said she left with a good record. Her husband retired from LAPD after 26 years. The couple moved to Mammoth Lakes.

In November, both of the Brauns were sworn in as Level One Reserve Mammoth Police Officers with duties of patrol shifts, special events, follow-up investigations and coordination of a Neighborhood Watch Program.

Now, Ingrid Braun will take the step to run for Sheriff. Sheriff Ralph Obenberger has also taken out papers to run for election. He holds his current position by appointment of the Board of Supervisors.

Ingrid Braun is running on the platform of a lovable, sweet, kind, benevolent leader. If she wins, can you imagine the disintegration of discipline if she follows that philosophy? All law enforcement personnel have Alpha personalities, and it takes a hard nosed Alpha personality to keep them under control. This… Read more »

I am currently an officer for the Los Angeles Police Department. I met Ingrid over 20 years ago. We were assigned the same Division in the San Fernando Valley. She and I actually worked together answering radio calls for sevice in a basic patrol car. I later became a partner… Read more »

I’ve worked with Ingrid’s husband on the LAPD and alongside a gang unit that Ingrid supervised. Gang units being the most scrutinized entities on the Department, and dealing with the worst of worst. You are not going to find two more people that are more dedicated to their community. She… Read more »

It is clear that Mono County Sheriff Department needs to change. Between lawsuits, harrassment of motorists, including those going to Burning Man, discontent of citizens, and Sheriff Obenberger’s poor attitude towards the Board of Supervisors (evidenced by his rude remarks and “show of force” at the Supervisor’s meeting) — this… Read more »

I’ve known and respected Mike and Ingrid Braun for many years, both as friends and co-workers. In my opinion as a 23 year law enforcement professional Ingrid Braun will serve the needs of the people of Mono County quite well. Seek her out. Talk to her. She will be a… Read more »

Wow, all those comments and not one in support of Obenberger, that’s amazing and very telling. I don’t know the Sheriff, but I’ve meet his wife and kids. Based on my experiences with them, they seem like nice, intelligent, open minded people. I was surprised to see the small minded… Read more »

I have to agree with Snow Bunny…..when Braun wins, I hope she is able to find an Undersheriff who will help her get rid of the morons who are in charge at MCSO. It is time for actual policing where criminals go to jail, not home to “sleep it off.”

I would much rather have a retired LAPD vs the Allegedly corrupt LASD. I know officers in both departments and by far the LAPD guy’s are much more trustworthy!

LAPD are every bit as crooked and poorly trained as LASD. Right now they are not in the news but don’t let that fool you. There was a Federal Consent Decree for very good reasons and the eventual termination Federal oversight was not without some controversy.

If Ingrid Braun gets elected, I hope that her first act will be to advertise statewide and find herself a honest, experienced, ethical and professional Undersheriff. This is the only way that she can change the multi decade culture at MCSD.

With a son named Opie?

Guess all the misdeeds are biting someone in the butt! Karma gotta love it!

Running a campaign based on a career with LASD can be a two edged sword. LASD doesn’t have a sterling reputation. The Sheriff is stepping down next month under a cloud, his number two recently resigned under pressure, his jail system is under Federal investigation and deputies are being indicted… Read more »

As the story says, Ms. Braun retired from LAPD not LASD.
BK

There wasn’t even fine print, LAPD.

LAPD makes LASD look like boy scouts. They managed to go right past investigation to Fed control. Pretty hard to do.

You apparently have no idea just how bad LAPD was, and to a degree still is. I will give you an idea of the way the LAPD used to shake down residents. I grew up in one of the better parts of the San Fernando Valley. A couple of motor… Read more »

Get Over It
Reply to  Desert Tortoise

What a shame that when DT was a child, his bike got taken to the police station because his bicycle wasn’t licensed as required by law in Los Angeles. What a shame that this caused him despise an entire organization, and “never in a million years get my vote.” Because… Read more »

You missed the point didn’t you. That was just one example. My dad knew there wasn’t any such law and called the desk sergeant’s bluff. It was a shake down for money by LAPD. My friends parents were not so aware of city ordinances and paid the LAPD what they… Read more »

Desert Tortoise….Read your post,and minutes later,turned on the news…a story out of L.A., with video,of a car being stopped by LAPD for the driver talking on a cell phone….the car attempted to flee,and within minutes must have been 100 squad cars following him on a busy street….and then,a few minutes… Read more »

Get Over It
Reply to  Desert Tortoise

No, DT, I didn’t miss the point at all. Unless you are very young, Los Angeles Municipal Code section 26.01 required a bicycle license until the LAPD stopped enforcing the section in 2009. Gullible? Not hardly. I don’t automatically accept what anyone says, including you. It’s sad that you are… Read more »

Wayne- Like so many others on this site you have made a knee-jerk assumption and now a knee-jerk reaction by writing about your TV observation. A 30 second news blip has given you complete information to make a judgement call against the police. An immediate expert on the situation like… Read more »

Also remember that Obenberger, as his own blurb on the Mono County website says “started his career with the Los Angeles County Sheriff’s Office for 15 years”. And no, no one person will be a miracle silver bullet that comes in and makes agencies all puppy dogs and rainbows. It… Read more »

…Actually,the incident I mentioned in the my post,it took place in San Diego,so LAPD wasn’t involved.

You’re stepping on your johnson as usual,DT…it is the current Sheriff RALPH O. that came from LASD.

I have learned the hard way over the years to never trust either agency’s officers. Never, not for a minute. Their institutional methods and mindset are all wrong. Find a sheriff from a smaller, less aggressive agency.

The agencies combined employ roughly 20,000 law enforcement officers. And you won’t trust any of them for one minute?

Sorry, but that just reeks of paranoia.

So in your mind the actions of a few incriminate 20,000 others?

COJ,
Not absolutely, but as long as good officers protect bad the whole force is tainted. History proves there is more than a “few” criminals in LAPD uniform. Braun may be a good candidate but needs to be vetted like anyone else.

The whole force is tainted?

Sorry, but I don’t agree with your all or nothing concept – especially when we’re talking about 20,000 individuals.

The same mentality your displaying was responsible for sending 100,000+ Japanese to internments like Manzanar camps in WWII.

Big Rick – I have a hard time believing that DT could actually “step on his own Johnson!” You, on the other hand, with a nickname like “Big Rick” may actually have that capability! 😀

Mammoth finally got a professional law enforcement officer with Chief Watson. Now it’s Mono Counties turn. Braun has got more experience going for her than most of the SO combined. YOU GO GIRL!!!

Remember!,,,, I just had to laugh when I read your post, because I remember when Obenberger and Scholl came up with that policy…. they were mad that their own deputies where hoping that Doug Northington would be elected and save them. They were mad that MCSO deputies had bumper magnets… Read more »

Good for you Ingrid Braun! Look forward to voting for you! As for Ralphy obenberger, I know what your campaign slogan will be: Vote for me OR ELSE! Your lack of supervisory experience and complete disregard for the law should speak volumes come debate time! Let me guess, your answers… Read more »

Ralphy won’t go out quietly, that’s for sure. It will be fun to watch him with his tail between his legs. Not a pair of shoes i’d want to ever be in. As a wise person once said, “Don’t poop where you eat”.

A true answer to our prayers. Someone with actual experience, professionalism, and proven leadership skills. Hopefully she can improve and raise the level that MCSO has sunk to. No law enforcement agency should be ran the way the MCSO has been run for years. It should be one of honor,… Read more »

Perhaps the good ole boy system in Mono County will finally crumble. Ralph Obenberger: 15 years at Los Angeles County Department and never promoted to even sergeant. Never worked a special assingment. Was a deputy in June Lake, no special assingments, went from Deputy to Lieutenant in 5 months under… Read more »

Ya, like LAPD isn’t a ole boy club. Look at this photo attached with this story. Guess what all LAPD…….Have you seen what problems L.A.P.D has had i.e. Rodney King more recently the Donner (ex-LAPD) escapade. people and officers killed. Great reputation and leadership. Ya, they don’t have any civil… Read more »

Bubba, when an agency has 10,000 officers there will be several bad eggs that slip through and make the lA news. The vast majority are good honest cops.

Several bad eggs? How about: The apple doesn’t fall far from the tree.

Another women with a pension? Let the sniffling begin……

Good! Hopefully she can unseat the incumbent and clean up the image of the department.