By News Staff on September 22, 2013 in Government Agencies/Utilities 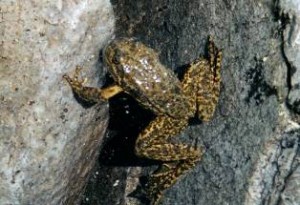 As the U.S. Fish and Wildlife Service moves forward with plans to designate what they call critical habitat for frogs and toads in the Eastern Sierra high country, down below citizens fear that the bureaucratic plan will halt trout plants in some lakes and hurt recreation. The Inyo Board of Supervisors scheduled a special meeting for Monday at 6pm at the Home Economics Building at the fairgrounds.

Fish and Wildlife spokesmen have said that their critical habitat designation for the yellow-legged frog and Yosemite toad will not in itself stop trout planting or access to the back country. Robert Moler, Public Information Officer for Fish and Wildlife, said that the designation would cause the Forest Service to consider its projects on federal land. He said, “Each activity is thoroughly evaluated on a case-by-case basis at the time the federal agency involved consults with the Fish and Wildlife Service.”

Fish and Wildlife wants to list the frogs and toads as endangered. Biologists say that these amphibians play a critical role in the web of life and natural food chain. They are food for snakes, birds, coyotes and bears.

The Inyo Board said that Monday’s meeting will allow the public to better understand impacts and how the Forest Service might respond to the new designation. The Inyo Board provided an internet link for comments and information: Proposed Endangered Species Listing Rule (FWS-R8-ES-2013-0110 or Proposed Critical Habitat Rule (FWS-R8-ES-2013-0074; or at the County Planning link: http:inyoplanning.org/projects/USFW_YellowLeggedFrog.htm.

Hi Philip Anaya, Yes I did make that video, but I never said that chytrid fungus was the only reason frogs are in trouble. Frogs have many threats, and the threats are not mutually exclusive. Thanks for your support of amphibian conservation efforts. it is our responsibility to prevent extinctions… Read more »

Here’s part of the problem, and one with an easy fix, had the Dept. of Fish & Wildlife the moxie to do it (they don’t, as yet): California annually imports some TWO MILLION non-native American bullfrogs for human consumption, most commercially-raised in Taiwan, and sold in various Chinatown live animal… Read more »

Last night at this meeting we all heard about the Chytrid Fungus as being one of the factors for the demise of the Frogs and the Toad. I googled Chytrid Fungus and found a web site savethefrogs.com. Dr. Kerry Kreiger in the nearly 2 hour recorded webcast shares his research… Read more »

It was probably not wise to spend 60 years building an economy around an invasive species..

Yet that is what they want to continue to do..

Mark, We do it well. Slaughtered buffalo and passenger pigeons, then raise cattle and poultry. Cut down Valley Oaks to plant grains that give less food per acre with much more work. Sheep instead of antelope. Trout instead of pupfish. Walk into the Garden of Eden and decide to tear… Read more »