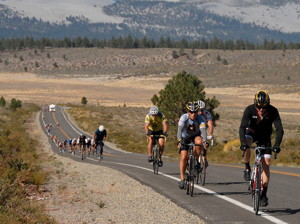 Chosen as a “Top-Ten Century Ride” by Bicycling Magazine in June 2012 for its “Jaw-Dropping Vistas,” and with over 1000 cyclists, the 2013 Mammoth High Sierra Fall Century & Gran Fondo

just completed its 19th and largest year ever.  Last Saturday, September 7th, 2013, starting at The Village

, 2010 Olympic Silver Medalist (Cycling Team Pursuit) acted as Grand Marshall and officially started 750 cyclists who rode down Main Street in Mammoth toward Highway 395 on the beginning of a Century and Gran Fondo ride that would require them to ride 103 miles and climb nearly 6900 feet before the completion of their ride that afternoon.

Nothing like this has ever happened in the Town of Mammoth Lakes before and it was a spectacle of color, excitement and energy with people on the street cheering and ringing cowbells in support of the riders and having a great time!

Another 300 cyclists completed shorter, but equally picturesque rides which started at the Whitmore Ballfields south of Mammoth Lakes.  The 60, 45 and 30 Mile ride participants also rode sections of the High Sierra Fall Century & Gran Fondo course.  While encompassing fewer miles, these rides were both challenging and spectacular too.

Six fully-stocked aid stations kept the riders fed and fueled for their adventure in an area of the Eastern Sierra that has been unofficially called the “Accidental National Park.”  Each rest stop was hosted and staffed by very enthusiastic volunteers providing food and hydration drinks in an atmosphere of fun and encouragement.  Three of the aid station stops were hosted by local volunteer organizations including Disabled Sports Eastern Sierra

.   The other three aid stations were hosted by Mammoth Hospita

, and the Mammoth Track Club

along with a lot of other community members were out on Hwy. 203/Main Street to cheer the Century and Gran Fondo riders as they completed their 103 mile ride.  Many of the riders thought the support of Deena, the Track Club and everyone else on the street was one of the most inspiring aspects of the day.

At the completion of their respective rides, all ride participants (Century, Fondo, 60, 45 and 30 mile riders) gathered together at The Village in Mammoth Lakes at the After-Ride Party and gourmet buffet-meal.  The Mark Sexton Band

from Los Angeles played live music all afternoon with a DJ filling-in for the band during breaks.

which happens during the week after Labor Day each year.  The Kamikaze Bike Games are a revival and update to the history-making “Kamikaze” mountain bike races that Mammoth Mountain hosted many years ago.

The five day, multi-disciplined event encompasses all kinds of extreme mountain bike events from the Kamikaze Downhill Race where riders race from the top of Mammoth Mountain to the bottom and hit speeds of up to 60 miles an hour to the Dual Slalom Race which incorporates dual slalom MTB racing (just like ski racing only on mountain bikes!) and the Slope and Style Race which is another slalom MTB race, but with big tricks thrown in by the riders as they race down the dual slalom course.

– a non-profit organization based in Mammoth Lakes that funds educational and athletic programs and facilities for kids in the Mammoth Lakes community.   All net proceeds from the  Kamikaze Bike Games and the Mammoth High Sierra Fall Century & Gran Fondo go to the Mammoth Mountain Community Foundation for the benefit of their programs.

Mammoth Mountain Ski Area Public Relations Manager, Deena Betcher, estimates that over the 5 day period encompassing the Kamikaze Bike Games and the Mammoth High Sierra Fall Century, over 1800 athletes participated in one or more of the events and as many as 10,000 or more spectators and guests were in the Town of Mammoth Lakes.

Our special thanks goes out to the many individuals, over 100 volunteers who helped-out both before and after the ride, volunteer organizations and businesses that supported the event.  Mammoth Mountain Ski Area

helped with promotion.  The Town of Mammoth Lakes

made a $50,000 contribution of Measure U Funds to help establish the Mammoth High Sierra Fall Century and Gran Fondo and the Kamikaze Bike Games as world-class events!

, the local road cycling club based in Mammoth Lakes with over 270 members was the USA Cycling Club of Record for the event.  Eastside Velo also offered extensive organizational and volunteer support for the Mammoth High Sierra Fall Century & Gran Fondo.

We want to thank the California Highway Patrol, the Mammoth Lakes Police Department, Mono County, and Cal-Trans for their outstanding cooperation and support of these events.  Riders commented that MLPD and CHP made them feel at home and looked out for their safety on the roads and highways of Mono County.

Finally, we want to thank our presenting sponsor, SONY®, and our many other sponsors without whom, these events simply could not happen.

We work to provide daily news to all of the Eastern Sierra, in the tradition of Eastern Sierra News Service and the Sierra Wave. We bring you daily happenings, local politics, crime, government dealings and fun stuff. Please contact us.
View all posts by News Staff →
Accidental death of a Mono County worker
Rossys continue through court hearings
3 Comments
Newest
Oldest Most Voted
Inline Feedbacks
View all comments

Thanks to all the volunteers who donated their time and efforts to helping make this ride a truly memorable event for the riders.

Approximately 10 CERT (Community Emergency Response Team) members also assisted the MLPD with road closures Saturday morning. We enjoyed helping out the event organizer and appreciate their donation to our non-profit coffers. It was quite a sight watching hundreds of bike riders snaking down Main Street last Saturday at 0730,… Read more »

Thank you for your service,
Yes it was quite a sight. We caught the start prior to a trip out of town. The picture that Brad Petross got from the helicopter is great.

It would be great if someone could bring back a stage race.