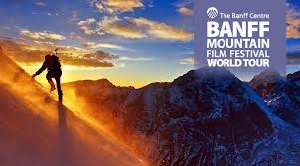 From: James and Kay Wilson

For the 19th consecutive year The Banff Mountain Film Festival World Tour has come to Bishop.  On Friday March 29th and 30st over 1200 people gathered at the Tri-County Fairgrounds for adventure, cultural, and natural history films from around the globe. Thanks to all who came, and all who helped. Special thanks to Kathy Anderson who was instrumental in the organization, the Tri-County Fairgrounds, the media who publicized the event, and all of the volunteers. And thanks to Lynn Cooper and Inyo Council for the Arts for all of the work they did. A special thanks to the Banff Centre and Holly Elliot who showed nearly five hours of superb film. Great Basin Bakery provided welcome goodies before the show and at the break. And additionally a big thanks is due to Wilson’s Eastside Sports and The Booky Joint for selling the tickets.

Over a dozen local non-profits had an opportunity to meet with folks and tell their stories. The films were spectacular, people saw old friends they had not seen in years, a good time was had. The net proceeds helps support the Inyo Council for the Arts, including art in the schools and Millpond Music Festival.

See you next year!