Some Mammoth residents have watched the U.S. flag flying over the Town offices in recent weeks, watched it shred into tatters in the snow and rain. We received their angry phone calls. 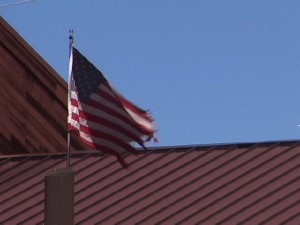 U.S. Flag code says no disrespect should be shown to the flag. The flag, says the code, represents a "living country and is itself considered a living thing." So, when Mammoth residents looked up over the Town offices and saw two tattered, rag-like flags, they got mad. After a series of phone calls, the weathered flags, including a California State flag, were replaced today.

Before the flag replacement, Mammoth Mayor Wendy Sugimura agreed that the flag needs to be respected, but she said the one above the Town office doesn't belong to the Town. It belongs to the property manager. She did agree that the Town is "as responsible as anyone else."

Councilman Skip Harvey said he was personally under the impression that if displayed, an American flag should be in good condition and lighted after dark. Harvey headed off to a meeting with the Town Manager and promised to look into the flag issue. 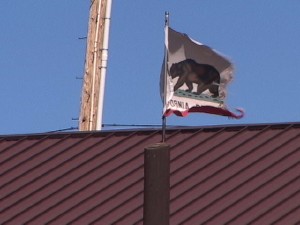 building of every public institution, should the Town erect a flag pole near the Town offices for more controlled display? The two council members said the current situation is the best the Town can do for now.

The California flag flew in an equal state if disarray, with the material raveled close to the bear. It too was replaced.

We work to provide daily news to all of the Eastern Sierra, in the tradition of Eastern Sierra News Service and the Sierra Wave. We bring you daily happenings, local politics, crime, government dealings and fun stuff. Please contact us.
View all posts by News Staff →
Accident Near Northern Inyo Hospital
College Dorms in Mammoth A Success