Faced with a $1.2 million shortfall in revenues, the Northern Inyo Healthcare District laid off five employees, none of whom are involved in direct patient care, according to Chief Executive Officer Kevin Flanigan. 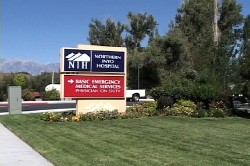 The lay-offs were Friday. The District held staff meetings the following Monday and Tuesday. By Tuesday, the rumors were flying.

In a phone interview, Flanigan explained hospital stays had dropped over a 180-day period. “If the drop had been over two or three months, that was one thing,” he said. After 180 days, the district had to assume that was the new norm.

That explanation “doesn’t make it any better for the people that got laid off,” Flanigan said.

He explained the process as one of analyzing the work load and identifying those positions that could be eliminated. “We looked at everything a person does,” he said. Can tasks done by hand now be automated? If enough work capacity can be removed from one position can the balance be moved to another? “It was driven by fiscal realities,” he said.

The transition to bring the budget back into alignment has three phases. Phase one was the lay-offs. “That’s it,” Flanigan said. No more lay-offs are in the plans. The next phase will be to look at current vacancies and decide which are really critical. The final phase, early retirement will take months to think through Flanigan said.

“If services pick-up,” he said, “we won’t have to go past the first phase.”

What the hospital needs are more sick people to fill the beds. The district’s outpatient numbers have nearly doubled over the last few years, but that’s not enough.

While the mandate included in the Affordable Care Act has been eliminated, the rest of the program is still intact and increasingly popular. The irony is a system that encourages and rewards quality of care and keeping people healthy matched to a financial structure that hasn’t caught up. That’s a theme not unique to NIHD. The healthier a district’s community, the fewer surgeries and hospital stays, the lower the revenue.

Is the district top heavy with more generals and not enough soldiers? Flanigan admits there may be some truth to that, but he’s comfortable with the mix. In fact, the top level, chief officers, have been reduced with nine positions held by seven people. Now there are four chief officers. At the next level, directors, Flanigan said some positions were eliminated that couldn’t be filled. “We have more managers and assistant managers now,” he said, filled with younger staff.

On the revenue side, the answer has to be adding services. The hospital is currently finalizing details to bring a urologist on board.

Flanigan said the district works with both the County and the City of Bishop to keep an eye on population shifts to anticipate the needs of the community going forward.

A move by the Veterans Administration allowing vets to seek healthcare from local providers hasn’t really helped Northern Inyo. Flanigan said the district has a staffer who works with the VA, but the red tape for both the patient and the hospital is daunting.

ever wonder why the laundry facility at NIH is nicer than the RHC? or how many fender benders have happended in the bad parking lots there?

Rumor has it NIH purchased the Joseph House for their traveling staff since most of them stay in hotels. Wonder if it’s true? Also I know I seek medical elsewhere if I can because the attitudes of staff at NIH suck! They don’t know how to whisper. I have heard… Read more »

I’ve had two experiences at Bishop NIH with some medical problems I was having…..two out-patient procedures.And both times at NIH I had very good treatment from the time I checked in,the prepping,and the care of the nurses and doctors involved in what I was having done.IMO,a very good and professional… Read more »

Sounds like they’re trading 5 pawns for a piss tester?

In reference to “ The district has a staffer that works with the VA but the red tape for the patient and hospital is daunting.” It sounds like the staffer is not doing their job or the job is not being done. Not unusual for this county.
Who is responsible?