Fireworks caused three small fires in the Bishop area over the weekend. Fires were reported on the Bishop Indian Resesrvation and at the Bishop Airport.

On Friday evening, the Bishop Volunteer firefighters responded to 786 N. Pa Ha for a report of a fire. On scene, the firefighters contained a 20 foot by 20 foot brushfire. Fire Chief Ray Seguine reports that this fire was likely caused by an illegal mortar type firework that sparked into dry vegetation. While there was a firework show at the Paiute Palace Casino, Seguine says that this fire was not caused by that firework show. 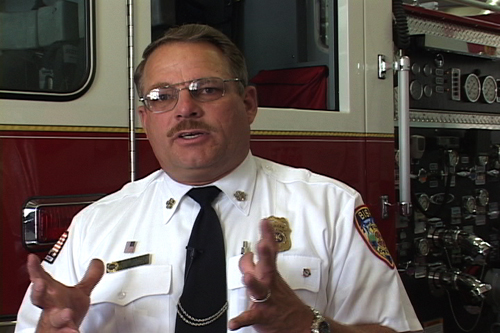 Another small fire on the Fourth of July was also most likely caused by illegal fireworks, according to Seguine. This fire was located at 650 N. Pa Ha. Firefighters kept this fire from spreading beyond 10 feet square, but the fire was not extinguished without incident. Seguine reports that the fire was difficult to access. While trying to gain access to the fire through an adjacent property, firefighters were told not to pass by individuals on that property.

Had this been a bigger fire that threatened homes, the chief says that fire fighters would have just gone through the property anyway, but with this small fire Seguine says, We didnt push it. He plans to discuss the issue of fire access with the Tribal Council in the future.

The third fire was also on the Fourth, but was not caused by illegal fireworks. A single bush caught fire at the airport, likely caused by the Bishop Volunteer Firework Show, but being a large organized event staffed by firefighters, this fire was quickly extinguished.

We work to provide daily news to all of the Eastern Sierra, in the tradition of Eastern Sierra News Service and the Sierra Wave. We bring you daily happenings, local politics, crime, government dealings and fun stuff. Please contact us.
View all posts by News Staff →
Fatal Climbing Accident Claims Mammoth Resident John Bachar
Body Found in Bridgeport Reservoir