By News Staff on April 16, 2012 in Government Agencies/Utilities 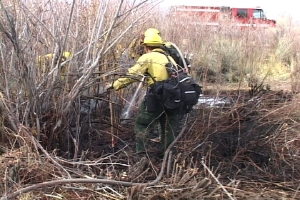 Two fires over the weekend.  One left a man dead.

On Friday, fire broke out in brush just east of Kmart on Department of Water and Power land. According to Inyo County Sheriff’s Investigator Scott, the fire was accidental and possibly due to an improperly extinguished camp fire. CalFire responded to the brush fire, along with inmates.  They quickly put the fire out.

Reports in the community said that at least one homeless person was living there. Investigator Scott confirmed that someone was living at the fire scene.  Deputies, he said, were instructed to advise the person that they are trespassing on DWP land.

On Saturday in Lone Pine, the fire department and Inyo County Sheriff’s Department responded to a vacant lot across from Lee’s Chevron on the south end of town.  An RV was on fire there.  When it was extinguished, firefighters found a deceased male subject, according to Investigator Scott.  Other reports said the man had been living in the RV.

A joint investigation is now underway to determine the man’s identity and the cause of the fire.  Investigator Scott said the Sheriff’s Department, an Olancha Fire Investigator and the County Coroner are involved in the investigation.