By News Staff on September 13, 2012 in Government Agencies/Utilities 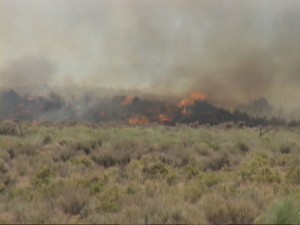 In July, the Fish Fire burned rapidly to within a half mile of the town of Big Pine.

Officials from the Inyo National Forest and Bishop Field Office of the Bureau of Land Management announced that Eastern Sierra fire restrictions put into place June 20 will be rescinded beginning today.

Recent seasonal changes in the fuel moisture, combined with increased humidity and cooler night time temperatures, have prompted the lifting of fire restrictions throughout the Inyo National Forest and the Bishop Field Office lands.

Although the land management agencies are lifting the fire restrictions, they would like to remind the public when recreating outdoors to continue to use caution to decrease the chance of human-caused fires and avoid resource and property damage.

The Eastern Sierra did handle two big fires this season – the Indian Fire southeast of Mono Lake started with a lightning strike and burned 13,500 acres.  The Fish Fire burned 1,103 acres southwest of Big Pine. CalFire has never released the cause of that fire which burned dangerously close to the community of Big Pine and caused a temporary voluntary evacuation notice that was lifted when firefighters held the blazes that made it to within a half mile of the town.

INET eradicates 4,000 marijuana plants
Separating the sheep from the goats