By News Staff on April 20, 2014 in Government Agencies/Utilities 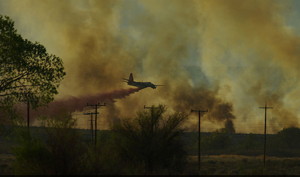 Photos by Jeff Webb of San Francisco, camping in area when fire started.

Saturday fire broke out in the Five Bridges area 5 miles northeast of Bishop. In such a dry year, fears came to the forefront that this fire could spread very 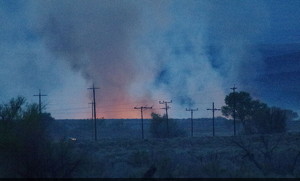 rapidly. Units from all over the Eastern Sierra responded. At last word the fire had burned 113 acres and was expected to be contained Tuesday.

The cause of the fire remained under investigation. On Sunday, the fire stood at 75% containment with firefighters continuing to build a containment line around the edge of the fire. They worked hard to mop up hot spots in the fire area.

Cal Fire spokesmen said wind influenced the fire and had shifted directions several times. Division Chief Paul Melendrez said that campers and those recreating outdoors need to consider the “end results of their activities such as abandoning campfires which can then spread if wind comes up. Plus,” he said, “we’re in the third year of a drought.” Melendrez said the concern is for the safety of citizens and firefighters.

Thanks for the information, and thanks even more to our first responders! This could be a long, long fire season. Be careful out there.

We need to get you a helicopter for these stories Benett.

Three POSITIVE comments and all 3 have thumbs down responses…I think we have a SCROOGE in our midst. I wonder who it could be…

I can smell it up here and could see that the valley was full of smoke obscuring the Whites.

The shape of things to come….

Darn phone!
I can see it starting to clear out now.
Thanks to all of the crews that responded!!

Thanks for the info….I live at Hilton Creek and can barely see the Whites…..was wondering were all the smoke was coming. I