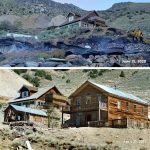 Before and After photos of the American Hotel, built in 1871.

The historic American Hotel, built in 1871, the Crapo House and the Ice House at Cerro Gordo burned down in what is thought to have been an electrical fire in an early morning fire on Monday, June 15, 2020. No injuries were reported, and the rest of the town is intact.

According to The Friends off Cerro Gordo Facebook website, the propane tanks of the hotel caught fire and exploded after the hotel itself started burning. The cause is under investigation but is suspected due to the old electrical wiring.

Burning embers all that is left of the historic hotel.

Everyone was asleep in the resident buildings when the fire broke out, and  fortunately the wind was in their favor and those buildings along with the museum, the bunkhouse, the chapel, and the Belshaw, the Gordon, Chinaman’s, and Hunter House are all untouched.

Photos of the town showing the buildings before the fire are posted on The Friends of Cerro Gordo Facebook website.

Omg , we were just there on Thursday sitting and chatting with Robert , what a terrible loss .

Need more info on how to help out. I think I can recruit help.

This is beyond sad and a terrible loss of history.

Say it’s not true..of all the places with any hope, not Cerritos Gordo!