By News Staff on August 17, 2012 in Government Agencies/Utilities 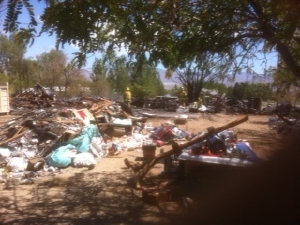 Total destruction – that was the result of a fire in Big Pine where officials say Harold Pierce lived.

Big Pine Fire Chief John Marzano said that it was reported Pierce was doing some welding on his property which caused nearby trash to catch on fire. Everything on the property burned, including a trailer.

No one was hurt in the fire that left everything on the property in southeast Big Pine a pile of burned rubble.  At the end of March another home on the same property had also burned down.

Responding to the fire were Big Pine Volunteer Fire Department, CalFire, the Inyo Sheriff’s Department and others.

We work to provide daily news to all of the Eastern Sierra, in the tradition of Eastern Sierra News Service and the Sierra Wave. We bring you daily happenings, local politics, crime, government dealings and fun stuff. Please contact us.
View all posts by News Staff →
Letter to the editor: Mono SAR golf tourney thanks
SB1148 changes