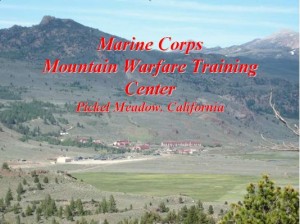 According to Marine spokesmen, a total of 38 families were displaced from the military housing after a propane gas explosion killed a Marine’s wife and critically burned two other people.

As of Sunday, 20 families had returned, according to Marine Captain Nicholas Mannweiler.  The explosion, he said, destroyed one house at the center of the blast but left 11 uninhabitable.  Manweiller said that there are 11 vacant homes that the displaced families can now use.

The woman killed in the explosion was Lori Hardin of Hudson, Iowa, 31, and wife of Gunnery Sergeant Greg G. Hardin. Two other blast victims, a Navy corpsman and his wife, were flown to hospitals with serious injuries and third-degree burns.  The corpsman was released from Renown Hospital in Reno.  His wife remained in critical condition at UC Davis Medical Center with an improving condition, according to Captain Mannweiler.

On Friday February 3, 2012 at approximately 8:53 p.m. the Mono County Sheriff’s Dispatch received numerous 911 calls regarding an explosion and a residential structure that was on fire at the Mountain Warfare Training Center (MWTC) Base Housing.

Upon arrival, medical personnel assisted the victims and fire personnel battled the fire, which was still engulfing the residence.  Careflight responded and two of the victims were airlifted to hospitals out of the area, with another victim being pronounced deceased at the scene.

Mono County Social Services responded and opened the Walker Community Center for use as a shelter, if needed, and the Red Cross was contacted out of both California and Nevada.

2 Responses to Fire at Marine housing, one dead