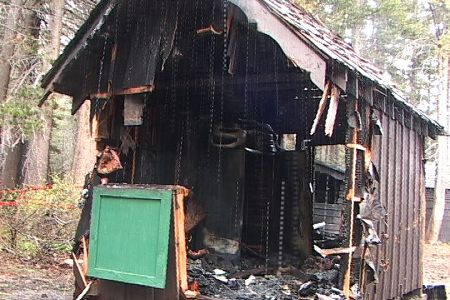 At a about 11:30 Monday night, Mammoth Fire Fighters were called out to the Mammoth Pack Station at Lake Mary for a report of fire. When firefighters arrived on scene, they found two of the buildings at the Pack Station fully engulfed in flames. The flames had started to spread into the nearby pines, but fire fighters quickly got a handle on the fire and kept the flames from spreading through the forest.

Nancy Upham with the Forest Service reports that the cookhouse, a historic building constructed in the 1930s, was totally destroyed. A second storage shed was also destroyed. What caused the fire remains under investigation.

We work to provide daily news to all of the Eastern Sierra, in the tradition of Eastern Sierra News Service and the Sierra Wave. We bring you daily happenings, local politics, crime, government dealings and fun stuff. Please contact us.
View all posts by News Staff →
Atmospheric Conditions, M&MS, and Sacramento Flubs
Uncertain Future for Bodie State Park