By News Staff on April 11, 2013 in Government Agencies/Utilities 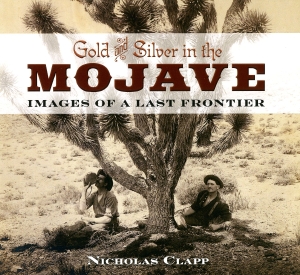 Cover of Gold and Silver in the Mojave

Award-winning documentary filmmaker and author Nicholas Clapp will be signing copies of his latest book, “Gold and Silver in the Mojave: Images of a Last Frontier,” at the Eastern California Museum in Independence on Saturday April 13 from 2-4 p.m. Clapp will make a presentation, followed by a question and answer session. Light refreshments will be served.

The photo book focuses on the colorful history of some of the wildest, booming and busted desert mining towns that popped up in a wide swath of generally inhospitable terrain, stretching from the southern Mojave Desert towns of Randsburg and Las Vegas northward through Death Valley and onward to Goldfield and Tonopah, Nevada.

Clapp makes a solid case that the gold and silver camps and towns that boomed to life around the turn of the 20th Century made up the West’s “last frontier,” a frontier in the midst of an untamed, 20-year rush to cash in on the desert’s untapped mineral riches. As a newspaper of the era noted, “Wonder camps were thronged with builders and wreckers, tradesmen and vultures, miners, cooks, gamblers and more gamblers, whores galore, what have you …”

“Gold and Silver in the Mojave” is an exhaustively researched book filled with photos that piece together the final days of the Old West through visually rich and rare photographs that include the sweeping landscapes and intimate images of the land’s nobodies and nabobs, and their common, if elusive, hope of striking it rich. The book’s photos capture the extraordinary images of what was to become a grand, tumultuous, rowdy last act of the Old West.

“It’s all here – the glamor, the grit, the gold, and the grandeur of the desert landscape … all the ingredients for a breathtaking visual experience of the last great rush for riches in the Old West. A beautifully crafted volume, this book is a must-buy,” said Linda Green Smith, the retired National Park Service Historian at Death Valley National Park.

The hundreds of photos in the book are complimented with Clapp’s always interesting, and often humorous comments about the scenes and people captured by the camera.

Clapp does not merely run down the history of each camp. He uses stories focusing on some aspect of the town or camp to personalize the often a harsh and unforgiving setting and living conditions in the mining camps and towns.

For example, the Death Valley camp of Skidoo gets it’s due, but so do the “Hootch Fighters’ League No. 4, Headquarters at the Gold Seal Saloon.” Also highlighted is how Joe Simpson shot and killed Jim Arnold. Simpson ended up hung by the neck on telephone pole, and his body dumped in a mine shaft. It was then pulled out and hung again for the benefit of a Los Angeles Herald photographer. The Skidoo News headline summed up the camp’s sentiment: “Murder in Camp: Murderer Lynched with General Approval.”

The book contains a significant section on Death Valley’s mining camps, mines and miners, including the numerous “jackass miners” of the era, including Shorty Harris and Chester Pray. Larger camps, such as Greenwater, and larger-than-life characters, such as Death Valley Scotty, also get their turn in the spotlight.

The rich history, and mines, of Randsburg are also documented with extensive photos and stories about the mines, the huge stamp mill, the town and the eventual rush to the next big strike.

The bigger, richer and more established mining towns are extensively documented with photos and text. Tonopah, exploded to a population of more than 10,000, thanks primarily to Jim and Belle Butler’s Mizpah Mine, which  eventually produced $150 million of silver ore (The Butlers also were extensive landowners in the Bishop and Big Pine areas). Tonopah had electric lights, a theater, and a diverse population. The book documents Tonopah’s hustle and bustle, it businesses and “entertainments,” its rich and poor residents and workers, and the inner workings of the mines that kept the town thriving.

Chapters are also devoted the Nevada’s two other booming desert mining towns, Rhyolite and Goldfield. Here Clapp employs a useful tool to put the once-sprawling, lively camps into perspective. He places a historic photo of the bustling camps alongside a photo of the ghost town remnants that greet visitors today.

Since the Mojave mining boom took place around 1900, professional photographers were among the merchants seeking to make a living off the mines and miners. These pioneering photographers showed remarkable skill in executing their photographs, whether they were extemporaneous shots of everyday life, posed photos in businesses, mines, saloons, and homes, or formal portraits of the leading families of each town or camp. Thus, the book’s photos are outstanding for both their content, their quality and clarity and, in some cases, artistic approach and style.

Clapp is also the author of “Who Killed Chester Pray? A Death Valley Mystery,” which will be available at the Museum Bookstore on Saturday, in addition to two other books on the Mojave Desert. He produced and directed “The Great Mojave Desert,” a one-hour special for CBS and the National Geographic Society.