A film screening about the Olympic feats of Andrea Mead Lawrence took on new meaning Tuesday evening after the passing away of the star of the film on Monday night. "Tonight will be the first of many celebrations of Andrea's life," stated local ski historian and former ski racer Robin Morning. The film, titled "Olympic Charm: Andrea Mead Lawrence, A Film," was produced by Allison Probliso who had met Lawrence two years prior. 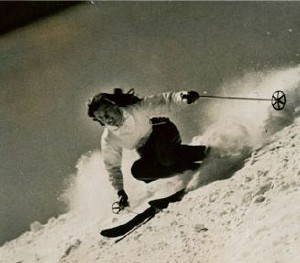 The Forest Service Auditorium in Mammoth Lakes was packed as Probliso introduced the film by saying, "I am so happy that Andrea allowed me to shine the light on her once again. I will miss her friendship and I wish she were here with us tonight." The film, which ran just under an hour in length, chronicled a young Lawrence's life as she rose through the ranks of ski racing. The film included interviews with many of Lawrence's friends like Dave McCoy and Klaus Obermeyer, and helped to explain what shaped and molded this strong, intelligent woman in her young life.

The film was part of the 2009 International Ski History Congress, which is taking place in Mammoth throughout this week. Prior to the film screening, Dr. Annette Hofmann from the University of Ludwigsburg presented a keynote address titled, "Left Out in the Cold? Women's Struggle for a Breakthrough in Ski Jumping."

Dr. Hofmann has been studying women ski jumpers' plight to get into the Olympics. She pointed to many instances where gender discrimination is still taking place today with men such as FIS President, Gian Franco Kasper still stating that ski jumping could be harmful to a woman's physique.

While women were allowed their first World Championship event in February of this year, the athletes' true goals lie in the Olympics. At first they were told they would be allowed to compete in the 2010 Vancouver Olympics, but that promise has since been changed with a vote of the International Olympic Committee to keep women out at least until 2014. The vote was based on the claim by the IOC that there was not enough interest in the sport to make it an Olympic event. However, Ski Cross, which was added in 2006, has fewer athletes competing on fewer continents than ski jumping. The issue is being taken to court in three weeks.

Many who attended the evening's events felt that the pairing of Dr. Hofmann's address and the film about Lawrence went perfectly together. Lawrence, who was once voted the greatest winter Olympian who ever lived, most likely would have been very interested in the battle that women's ski jumpers are facing at this time. For, as she stated in the film, the person who is told they can't do something but continues to push forward with trying to do it will come out a winner.

We work to provide daily news to all of the Eastern Sierra, in the tradition of Eastern Sierra News Service and the Sierra Wave. We bring you daily happenings, local politics, crime, government dealings and fun stuff. Please contact us.
View all posts by News Staff →
Parents Petition School Board to Keep Coach Egan
Highway 203 Ownership Carries Hefty Price Tag