Eastern Sierra supervisors got a first-hand look at the devastation caused by the Rough Fire last year and came back with a mix of long-term good news and short-term not so good news. 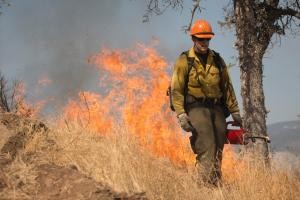 Supervisors Jeff Griffiths from Inyo and Stacy Corless from Mono were included in the tour last month at the urging of Inyo National Forest Public Information Officer Debra Schweizer. While the flames from recent mega fires scorched the West Sierra, the East Side got the smoke. It was important Eastern Sierra residents understood the magnitude of the problem.

Griffiths reported back during the June 13 Bishop City Council meeting. “The Rough Fire started in a steep canyon,” he said. “There was no way to drop firefighters.” With the combination of drought, warmer winters and bark beetles attacking already-stressed trees, the Eastern Sierra will be seeing smoke for a while.

The tree mortality rate in the Sierra is massive, with an estimated 30 million pines providing kindling for future fires.

But, the Forest Service is developing a new strategy to address an issue exacerbated by climate change and the last 100 years of fire suppression. The strategy is outlined in the INF Draft Forest Plan.

“There are more pro-active options,” said Schweizer. Those options include mechanical thinning and prescribed burns covering approximately 40,000-50,000 acres per decade in the Inyo National Forest’s preferred Alternative B, starting in 2017.

In addition, lightning strike fires in certain areas of the forest will be allowed to burn as long as they don’t threaten life and property. The draft plan indicates those areas as Wildfire Maintenance Areas where resources will benefit from fire.

The concept of beneficial fires isn’t new. Native Americans viewed fire as part of a natural process. Some mountain grazing meadows were created by Tribes using irrigation systems and fire. Then along came white folks who attacked fire as if it were the enemy.

According to Schweizer, fire suppression has contributed to overly-dense forests. The optimum, natural density in Sierra forests is 30-40 trees per acre. Now, the forests are asked to maintain 200 trees per acre.

Some pine species’ seeds are smoke triggered, others germinate only by fire. Fire may be the enemy of communities in or near forests, but healthy forests are dependent on it.

The lightning strike Rough Fire started in Kings Canyon in late July and dumped smoke in the Eastern Sierra until mid-fall burning through 151,623 acres. In 2013, the East Side choked on smoke from the Rim Fire for two months as it made its way through the Sierra, burning 257,314 acres.

According to Schweizer, both fires were stopped when they hit areas of previous forest fires. That’s the theory behind allowing naturally-caused fires to run their course in specific areas.

Both Griffiths and Schweizer stressed that smoke from controlled prescribed fires will have significantly less impact on the East Side than the uncontrolled, wind-driven fires of the last few years.
“Fire management can do beautiful things to the landscape,” Schweizer said. “It took 100 years to get where we are today.” The forests aren’t going to get healthy overnight.