By News Staff on May 9, 2016 in General Misc. Stories, Obituaries, Public Event

Shirley Rae Whorff Fendon passed-on peacefully, Thursday, April 28th, 2016. She was at home surrounded by her family as they sang her favorite hymns, prayed her favorite prayers and sent her on her way wrapped in love to the next stage of her journey in eternal life. 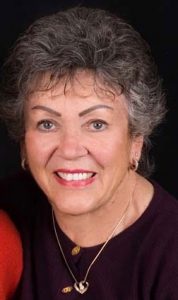 Shirley Rae Whorff was born to Mazie and Bill Whorff of Bishop, CA in 1933. Bill and Mazie travelled to Beverly Hills, CA, for Shirley Rae’s birth, returning to Bishop a few days later. Shirley Rae grew up in Bishop spending her childhood in and around her parents’ business, the Kittie Lee Inn and Copper Kettle restaurant which is depicted today in a mural on the south wall of Whiskey Creek in Bishop. The Copper Kettle became Whiskey Creek in the 1980’s after Sam Walker purchased the business.

Interestingly, Bill and Mazie Whorff’s home sat between the Copper Kettle and the Fendon’s Furniture building in what is now the patio area for the Whiskey Creek banquet room. Shirley Rae spent a great deal of time playing in and around the house and restaurant with her childhood friends, several of whom were Native American children from our local Paiute Tribe. While Shirley loved all people and had many friends, her friendship with her Paiute “brothers and sisters” continued throughout her lifetime. She considered them some of her dearest friends and was deeply honored that they considered her their “sister.” 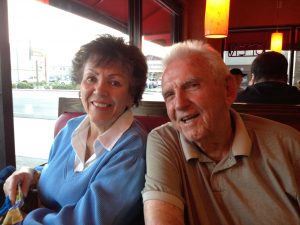 Shirley’s mother and father, Bill and Mazie Whorff, her aunt and uncle, Chet and Ruthie Janes, as well as other extended family members and friends were all part of the old Eastern Sierra Ski Club. Shirley had many fond memories of skiing at McGee Mountain on the old Rope Tow, and in later years taking the “Weasel” up to Mammoth Mountain. Her family and friends also loved ice-skating on Rock Creek Lake with a large bonfire and their old cars frequently parked nearby on the ice. These were some of Shirley Rae’s most loved childhood memories. 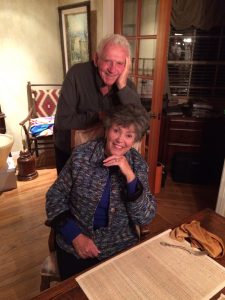 After high school, Shirley attended two years of college at Stephens College in Columbia, MO, returning to Bishop in the summer of 1953.

In 1949, after moving from Chicago to Ontario, CA, Jerry Fendon started making monthly trips to the Owens Valley, calling on customers throughout Inyo and Mono Counties to reupholster their furniture and rebuild mattresses from the shop were he worked in Ontario. On his travels to Bishop, Jerry did a lot of reupholstery work for Shirley’s mother, Mazie, in her home and the Kittie Lee Inn. Shirley and Jerry eventually met and dated for some time before they married in the summer of 1956.

After marrying, Shirley and Jerry lived in Ontario for a short time while Jerry continued to travel to the Eastern Sierra. By 1958, Jerry and Shirley were back in Bishop, where Jerry slowly established his local reupholstery business while helping Shirley’s father, Bill, cook in the Copper Kettle whenever he needed him. Shirley got a job at Continental Telephone on Main Street in Bishop as an Operator, working the old manual switchboard on graveyard shifts and helping in the Copper Kettle when she could. 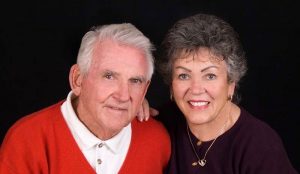 In 1960, Shirley and Jerry’s first son, Randy, was born and Jerry’s upholstery shop was getting busier. Shirley continued to work for the phone company at night and helped in the afternoons with the bookkeeping and office duties in the upholstery shop while Randy played nearby in his playpen.

As Jerry and Shirley’s business continued to grow, Shirley eventually quit the graveyard shifts at the phone company, but not before acquiring a lot of interesting and fun stories from late nights switching phone calls. One of the more interesting characters she encountered on the switchboard was famed Nevada brothel operator, Joe Conforte. Conforte owned and operated the first legal brothel in the United States – the Mustang Ranch in Storey County Nevada. Conforte often called one of his other brothels near Bishop (Janie’s Ranch) just over the state line on Highway 6 near Montgomery Pass. Shirley put those calls through and would have brief conversations with him during the process of connecting his calls. She said he was always “very nice” on the phone and she enjoyed their visits.

In 1965, Shirley and Jerry’s second son, Bill, was born. Bill was named “William Whorff Fendon” after his maternal grandfather. With two young children, Shirley stayed busy being a mother, but she still helped Jerry in the upholstery shop and her parents in the Copper Kettle.

Shirley brought the boys to work with her when they were little and they went there each afternoon after school. Shirley, Jerry, Randy and Bill spent most of their time in and around Fendon’s and the Copper Kettle for many years – on the same property Shirley Rae had grown up on. Shirley’s cousins, Susie and Robbie Janes and their parents, Ruthie and Chet Janes (Shirley’s favorite uncle) also spent a lot of time in Bill and Mazie Whorff’s home and the Copper Kettle. It was a great family gathering place with many good friends and everyone had a lot of fun times there!

In raising Randy and Bill, Shirley was adamant about teaching them certain lessons and character qualities. These included “Love and trust God and let good direct your path. Always tell the truth. Always do what’s right whether anyone knows or not. Treat everyone no matter who they are with kindness, respect and dignity. Help and protect animals. Don’t take yourself too seriously and don’t be afraid to laugh at yourself. And finally, Laugh – a lot!”

After Bill was born and survived a nearly fatal illness as an infant, Shirley dedicated herself to serving God and her church the best she could. She and Jerry have been members of the Christian Science Church in Bishop ever since. Shirley attended Church consistently and served faithfully in nearly every capacity the Church offered throughout her life. She also conducted nearly 60 Christian Science memorial services for members of the church, as well as for many other families in the community who were not Christian Scientists but sought her out to do their memorials.

The years went by, the boys grew up, and Shirley and Jerry’s business continued growing as she and Jerry served the people of Inyo and Mono Counties with their home furnishings needs. At the same time, Shirley was genuinely passionate about the town she loved and serving her community in any way that she could.

She was very involved in and a founding member of the Bishop Mural Society. She loved Mule Days and thoroughly enjoyed driving visitors and dignitaries around the fairgrounds in golf carts each year for the Mule Days committee. She was on the Laws Railroad Museum restoration committee. She was integral to the planning and implementation of the Kern W. (Hudson) Dunagan Congressional Medal of Honor Memorial in front of the Chamber of Commerce in downtown Bishop. Colonel Dunagan was one of Shirley’s classmates and she was honored to be part of the memorial committee.

Shirley enthusiastically supported Ted and Lisa Schade’s early work with the animal shelters in Inyo and Mono Counties and Inyo/Mono County Animal Resources and Education (ICARE), making sure that Fendon’s Furniture supported the annual ICARE fundraisers generously. She also quietly helped many individuals in and around Bishop throughout her life and rescued countless stray animals, often taking them for veterinarian services or finding them homes.

Shirley and Jerry spent the majority of their adult lives running their local business, where they delighted in the innumerable friendships and acquaintances they had over the years. Some of Shirley’s dearest friends are the staff at Fendon’s Furniture, many of who have worked with the Fendon family for years, are appreciated immeasurably and considered part of the family.

In recent years, Shirley tried to personally call everyone who purchased furniture, mattresses or had reupholstery or woodwork done at Fendon’s. She loved to thank them for their business and to make sure they were completely satisfied. She thoroughly enjoyed these calls and had a great time visiting with all of Fendon’s customers. Everyone at the store and Fendon’s customers will miss having her in the store making these calls on a daily basis, visiting with customers and telling stories of the “old days” in Bishop.

One of Shirley’s favorite sayings was “Be kind and sweet to all you meet. Be honest and true and that will be you.” That is how she will be remembered by those who knew her well.

A celebration of life will be held for Shirley Rae Whorff Fendon on Sunday, June 12th, 2016 at 2pm in the Whiskey Creek patio. The Fendon family would love to have everyone who knew her join them at Whiskey Creek that day to share their memories about Shirley Rae. Please bring your stories and plan to have fun! That is what she would want!

In lieu of flowers, please make a donation in Shirley’s name to any appropriate military veterans support organization, ICARE (Inyo/Mono County Animal Resources and Education) or ASPCA (American Society for the Prevention of Cruelty to Animals).

So sorry for your loss please give my condolences to Jerry.. I work at Dennys and they both were my great customers?

Thanks for your comments. Those are good memories and there aren’t as many people around that remember that stuff about her these days. Stop by the store when you’re in Bishop and say hi. It would be good to see you. Take care,
Randy

Randy, I’m sorry for your loss. I hope you and your family are doing well. I have fond memories of seeing your mom at Copper Kettle and around Mule Days.

Trouble, thank you for your comment. We will miss my mom around here everyday. Fortunately, we have a lot of great memories and pictures plus her example of living to think of and remember. Thanks too for mentioning the small favor. We try to do a lot of those types… Read more »

Randy I want to send my condolences to you and your father. You did a small favor for me once and it ended up being one of my fondest memories of my life up here. I’m grateful I had the opportunity to meet you. Love and best wishes always!

Thanks, Chuck. She always loved having you over at the house. She loved your sense of humor! Randy

A truly wonderful lady. I know she will be dearly missed by her friends and family.