By News Staff on September 20, 2013 in Government Agencies/Utilities 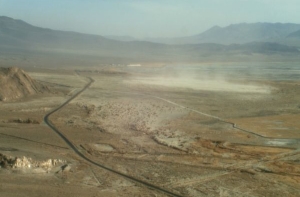 I am dismayed at the comments made by Great Basin Unified Air Pollution Control District board (GBUAPCD) members during the September 16 meeting at Mammoth Lakes.  On the agenda was change to the 2008 SIP and the Coso Maintenance Plan to adjust for the Phase 7a and Keeler Dunes Settlement Terms.  This is a worthy settlement that was negotiated in good faith between this Board and the LADWP Commissioners.  But, this simple and approved process was hijacked by Los Angeles.  As usual, when LADWP wants to throw a wrench into the works, they manage to irritate the Board, who make some disapproving comments, then acquiesce.   And, as usual, the City communicates volumes of demands and changes late on the evening of the workday prior to the meeting.  It is rare to see the Board react with consequences for the intentionally, disruptive tactic. The Board mostly absorbs the disruption, then moves ahead incorporating (or at least entertaining) LA’s demands.  At this meeting, LADWP decided to throw in an issue that is not part of the Phase 7a and Keeler Dunes Settlement Agreement.  It is, however, something the City has been trying to get agencies and environmental organizations to support since the defunct Owens Lake Master Planning Committee was established in 2010.

Some background:  In the negotiated State Implementation Plan (SIP), LADWP had certain options for dust control as well as the ability to test for new ones.  They chose shallow flooding in many areas.  As the City grew, polluted its own groundwater, lost options on other sources of clean water, and was forced to rewater the lower Owens River, it turned to the Owens Valley water that is currently used for dust mitigation at Owens Lake.  Surprisingly, it was Eastern Sierra Audubon members who convinced LADWP that they could use much less water while providing better wildlife habitat and control dust emissions.  This design has wide agreement within the Valley. Many areas are scheduled for “transition” from shallow flooding during the next mitigation phases and over several years.  The benefit to Los Angeles is a return of nearly 40,000 acre feet of water export each year.

But, wait… making these transitions will cost Los Angeles a lot of money – up to $1 billion.  The delicate process of transitioning from high water use to low or no water use has to be done without allowing a lot of dust (enough to violate air quality standards) to escape the lakebed perimeter.  Recall that these areas are already mitigated.  They are checked off the list of highly emissive sites.  We thank LA and Great Basin for greatly reducing dust pollution over the last 12 years.  Throughout the Owens Lake Master Plan and the ultimate Master Project processes LADWP has insisted that they should be immune from penalties for air quality violations during transition.  This is, of course, not legal and not our problem.  They do not have to transition.  It is a choice that makes good business sense for LA and will improve bird habitat on the lakebed.  Trading better bird habitat for a return to more air pollution over many years of construction is just not acceptable.  Transition can be accomplished cleanly, but will cost Los Angeles more money than by not doing it cleanly.  Reducing expenses is good, but not an acceptable trade-off for more air pollution.

Let’s go back many years to the Clean Air Act.  This federal law requires that states protect us from air pollution sources.  The California Air Resources Board (CARB) established separate airshed regional offices to regulate air pollution in their specific districts.  GBUAPCD is here to protect our airshed.  LADWP was deemed legally responsible for the extreme dust emissions off of Owens Lake bed due to their water diversion. Ultimately, a document was negotiated to mitigate the worst PM10 air pollution source in the entire country.  David Freeman was General Manager back then.  LADWP’s sense of environmental responsibility was more progressive in those days.  Freeman recently said, “They [LADWP] don’t understand history.  The Eastern Sierra can fight back…Show them you are not a door mat, up there.”

The citizens of southern Inyo are most impacted by dust from this source.  Yet, at Monday’s meeting, our two Inyo County Supervisors who sit on the District board voiced their approval when LADWP’s attorney demanded relief from consequences for anticipated violations of air quality standards during transition.  The Board has required that the District Staff craft some language for a revision to the SIP that will allow DWP to slip back to greater air pollution. Is this OK with you?  Are you, as residents, willing to give up gains in cleaner air to save Los Angeles some money?  Talk with your representatives about their roles in air pollution regulation.  Better yet, send your team of attorneys to speak for you at the Board meetings.  That seems to have more influence.

We work to provide daily news to all of the Eastern Sierra, in the tradition of Eastern Sierra News Service and the Sierra Wave. We bring you daily happenings, local politics, crime, government dealings and fun stuff. Please contact us.
View all posts by News Staff →
Another mega-solar project near Independence
Meetings on Bishop ATV Trail System
14 Comments
Newest
Oldest Most Voted
Inline Feedbacks
View all comments

Money talks, regardless of whose the giver or whose the taker. We’re talking California here…everything is for sale, regardless if we choose to believe it or not.

LA is very far from going broke. That is a rumor that was used by one candidate against another for the recent mayoral campaign, but there is no truth in it whatsoever. In any event, as Buck points out, LADWP is financially independent of the rest of Los Angeles city… Read more »

Well, as I pointed out they aren’t entirely financially independent. Time will tell.

And as I pointed out, you have cause and effect backwards and make an unsubstantiated assertion.

$1,000,000,000 is not a little money. Taking a step back in air quality is not easy to swallow, especially when it was so hard won. LA is in financial trouble and pushing it toward bankruptcy could stop or reverse the good done at Owens Lake. If the City becomes insolvent… Read more »

Not only is taking a step back in air quality not easy to swallow, it is not acceptable or legal. The residents of the Owens Valley should not have to breath one additional speck of DWP’s dust just so they can take even more water down to LA. Notice that… Read more »

It’s not legal to cross a highway median, but if my child ran into the road I would do it to avoid killing her. If you bargain from the point of “one additional speck” at this point, you better be prepared for DWP to call your bluff or fold their… Read more »

Yours is as uneducated a comment as possible. The “City” in the OV means LADWP, an enterprise funded operation. It is perhaps the wealthiest public utility on the planet and of course may not be used to fund any other City business. The “City” may go broke, close libraries, declare… Read more »

LADWP is an asset owned by the city of LA. The courts could rule that it be used to satisfy claims against the city. The City has considered selling off DWP before. City Charter requires a percentage of DWP revenues to go to the city’s general fund. The charter has… Read more »

I think you are making up the assertion that LA considered selling DWP. You need to document that claim. As for the claim that LA transferred employees to DWP, you have it all backward. DWP is so independent of the rest of the city, they have their own pay scale… Read more »

Transferred and bankruptcy may be bad choices of words and overstated. That DWP is so independent of the City that it is not used as a cash cow to support the city is wishful thinking. The financial state of LA is more than “rumor”. Regardless of all that, I still… Read more »

There is ample evidence that LADWP is treated more like a City Department, than as a stand- alone utility serving the ratepayers of the City. It is clear that political involvement of the city has had a negative impact to the efficient and effective management of the utility. Examples of… Read more »

😉 Desert Tortoise, Raven got your tongue?