Mono Sheriff’s officers captured a bank robbery suspect in the Bridgeport area after they received a call from the FBI. 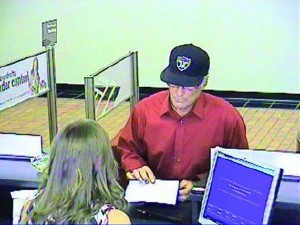 The Auburn Journal published this image, believed to be John Alexander, from a bank surveillance camera.

Federal agents said that a man wanted on bank robbery in the San Jose area might be camping in the Bridgeport area.

Deputies went to work to find out. At about 9:20pm Tuesday, a Mono Deputy patrolling the area around Buckeye Campground in Bridgeport located the bank robbery suspect’s vehicle.

Officers did take the man into custody without incident. He is 56-year-old John Robert Alexander of Auburn, CA. Officers allege that the man was involved in nine bank robberies.

In fact, the FBI dubbed Alexander as the “Posse Box bandit”. The Auburn Journal newspaper said a posse box is a clip board with a storage container attached. Officers said Alexander used one during his first robbery, captured on surveillance video.

Alexander remained in custody at the Mono County Jail at last report.

We work to provide daily news to all of the Eastern Sierra, in the tradition of Eastern Sierra News Service and the Sierra Wave. We bring you daily happenings, local politics, crime, government dealings and fun stuff. Please contact us.
View all posts by News Staff →
Fees to Reds Meadow Change
ICARE Pets: Delilah and Cubby