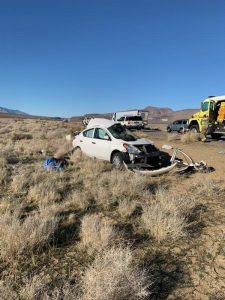 “On February 13, 2020, at approximately 2:00 PM, 78 year old Robert Frost of Green Valley, AZ, was driving a 2016 Nissan Versa westbound on Gill Station Coso Road, approaching the intersection of US-395. At the same time, 37 year old John Stiegler of Ridgecrest, CA, was driving a 2014 International Semi-Truck northbound along US-395 at approximately 55 MPH. Frost entered the intersection without yielding to the approaching semi-truck. The semi-truck collided with the left side of the Nissan Versa, causing the car to overturn into the center divider of US-395. Personnel from the Olancha Volunteer Fire Department, Liberty Ambulance, Caltrans, CHP-Inyokern Resident Post, and CHP-Lone Pine Resident Post responded to the collision scene. Robert Frost was airlifted by Mercy Air of Barstow, CA, from the collision scene to Kern Medical Center in Bakersfield, CA with major injuries. An 88 year old female of Sahurita, AZ was sitting in the right-front passenger seat of the Nissan Versa at the time of the collision. She suffered fatal injuries as a result of the collision. The driver of the semi-truck was uninjured.

The identity of the deceased party will be released through the Inyo County Coroner’s Office after proper notifications have been made. This collision is currently under investigation by  Bishop CHP.