By News Staff on May 14, 2013 in Fire, General Misc. Stories, Law Enforcement

On the early morning of Tuesday, May 14, 2013, at approximately 3:45 am, Mono County Sheriff’s Dispatch received a 911 call regarding a possible explosion. A single big rig semi-tractor trailer had failed to negotiate the turn at Hwy 182 and Hwy 395 in Bridgeport. The semi tractor-trailer went over the bridge, landing on the embankment of the East Walker River, where the big rig became fully engulfed in flames upon impact. 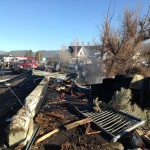 Mono County Sheriff’s Deputies, California Highway Patrol Officers, Bridgeport Fire Department, Mammoth Lakes Fire Department Hazmat Team, Mono County Paramedics, and Caltrans all responded to the scene. Upon arrival it was determined that the driver was killed in the crash. As of 6:20 am, fire crews are still working on putting out the big rig fire.

Until further notice, Hwy 395, both north and southbound, is closed out of Bridgeport. All traffic heading northbound towards Bridgeport will be detoured at Hwy 182, to Nevada 338, to Nevada 208, and back to Hwy 395. For those travelers heading southbound from Nevada, you will be detoured from Hwy 395, to Nevada 208, to Nevada 338, to Hwy 182 and back onto Hwy 395. All local roads will remain open at this time to help detour traffic around the crash site. Hwy 395 will remain closed until the accident scene is clear and the bridge is determined via Caltrans to be safe to drive over.

Having many years and over a million miles driving trucks, I am going to bet the driver simply fell asleep. I’v lost a couple of driver friends that way, driving gasoline tank trucks. The industry over works and under pays it’s drivers. There are constant time pressures to meet delievery… Read more »

You’re right about a lot of points there DT I am not hosing truckers, just pointing out some things I have observed. There has to be some regulation, because, as you say, the companies and drivers would be totally out of control. This accident occurred about 3:30 – 3:45, he… Read more »

Was there any environmental issues with the river ? I remember a fuel tanker went into the east Walker a few years back( on New Years eve ) and did all kinds of damage even though the river was mostly froze.

Big Rick…How about the time,back in the mid 80’s when that tour bus crashed into the Walker River near the town of Walker,killing twenty-something senior citizens….Didn’t that result in a big diesel spill into the river too ?..I can remember going by that scene a couple days after the accident… Read more »

Tim…Bet your right..I did an accident clean-up in Olancha a couple years back when a big-rig tried to dodge cattle in the road and crashed up and into a tree,then bursting into flames.Question…Where this accident happened,is this the bridge coming into town if your headed north into Bridgeport ?

Yes its that bridge right where you make the left turn into town…R.I.P.to the truck driver

I would like to see follow up on this sad story. My guess is that there was another vehicle or an animal that caused the trucker to swerve and loose control. 395 and the truckers that I encounter on the road, wherever they are, have my full attention and respect.… Read more »

Just a thought …. An animal or another car is one scenario, but a fair amount of truck drivers out there today, have no business driving trucks let alone a Volkswagen. I can not say what happened here .. Your speculation Tim is one scenario for sure. I have worked… Read more »