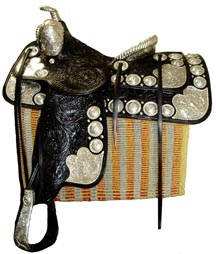 (Press Release)  Charles Pizarro Martinez was one of America’s great silversmiths and saddle makers. Beginning in the 1930’s Martinez envisioned creating a centerpiece, sterling silver parade saddle, for his showroom emphasizing the detailed hand engraved stamped sterling silver, which he ultimately became famous for.  He regularly set aside specialty conchos and silver decorative hardware for the project.  Unfortunately he died in 1960  and the collection of silver sat  in storage for almost 50 years. In 2008, his son, Charles Pizarro IIIa.k.a. “Chuck,” thought having the saddle finished would be a great tribute and gift for his mother’s then, up-coming, 90th birthday. Working with a collaborative group of well-known silversmiths and leather workers , including Sunset Trails and Bob Scott, the saddle was indeed finished in 2008 for her birthday.

Unfortunately, Chuck had to return to his home in Hawaii prior to his mother’s birthday but was on the phone with her as it was presented to her by his other brothers and sisters. She was thrilled to see the beautiful work of her late husband brought to life ! Sadly, Chuck passed away suddenly just over a month after he returned to Hawaii, but he knew he had completed the work of his father and had made his mother proud.

Now, four years later, this beautifully hand-crafted sterling silver will debut in the 2013 Rose Parade, being ridden by a member of the Long Beach Mounted Police. Charles and Eleanor’s children are excited that their father’s celebrated  art will  be seen by millions of people in the Rose Parade and hope that their mother, now 94, and very frail, will be with them to see it’s place in the parade.

The saddle has been, and will continue to be on display after the parade in the Lone Pine Film History  Museum in Lone Pine, CA.

For more information on the saddle please see:
http://www.lonepinefilmhistorymuseum.org/index.php?option=com_content&view=article&id=215:martinez-mccabe-saddle&catid=28:exhibits&Itemid=60

We work to provide daily news to all of the Eastern Sierra, in the tradition of Eastern Sierra News Service and the Sierra Wave. We bring you daily happenings, local politics, crime, government dealings and fun stuff. Please contact us.
View all posts by News Staff →
Spellbinder and ICARE help the animals
Dennis Mattinson’s Weather Forecast