One of the most sad occurrences for the public and for families – the death of peace officers in the line duty. We are moved by their heroic ability to carry out jobs in the face of death and saddened when they fall. Every year, the California Peace Officers Association carries out a formal memorial ceremony in Sacramento to honor fallen officers, even as far back as the early 1900s. 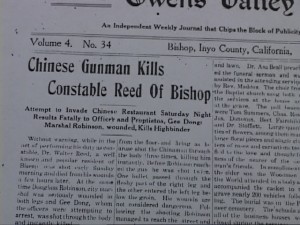 Inyo County Sheriff's Lieutenant Randy Geiger became aware of a local fallen officer from 1912. This year, Constable Walter Reed was honored, along with his family.

Lt. Geiger showed us newspapers of the day with accounts of the 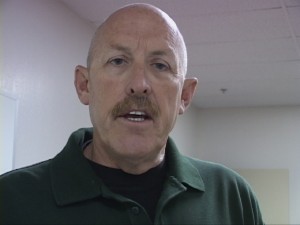 Inyo has listed 5 fallen officers for the state memorial, including Under Sheriff Jim Randolph in 1979.

Statistics show that in the past 10 years 1,640 peace officers were killed in the line of duty.

This week's tribute featured the Walk of Honor from the state Capitol to the Memorial. The ceremony concluded with a 21-gun salute, taps and retiring of the colors.

We work to provide daily news to all of the Eastern Sierra, in the tradition of Eastern Sierra News Service and the Sierra Wave. We bring you daily happenings, local politics, crime, government dealings and fun stuff. Please contact us.
View all posts by News Staff →
Barker Fire Investigation Begins
Community’s American Flag Returned