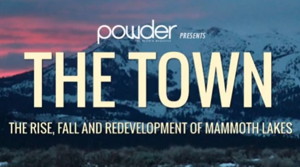 Local people lived through it over something like 70 years. For those who want a 16-minute version of Mammoth’s rise and fall to near bankruptcy, an online documentary offers a creative look.

Two students of the UC Berkley Graduate School of Journalism, C.K. Hickey and Matt Sarnacki, researched and documented Mammoth’s history and the steps leading up to the declaration of bankruptcy and beyond. Hickey had vacationed in Mammoth Lakes most of his life and heard from his Grandfather that Mammoth was headed for trouble. Hickey handled web design and what’s called Immersive Design which deals with story-driven media of all kinds. Sarnacki led the reporting and video production.

Powder Magazine is airing the documentary on its site at www.powdermag.com/the-town/. The show is called “The Town – the rise, fall and re-development of Mammoth Lakes”. It starts with a current interview of Dave McCoy who said he saw Mammoth when he was 12 and knew that’s where he wanted to be. From the magic of McCoy, the film moves on to the Ski Area purchase by corporate Intrawest and mistakes made over development at Mammoth Airport.

At the end of the film, Mammoth Mountain CEO Rusty Gregory goes to the philosophical when he speaks of a look from “a long way back.” He points to the Sierra with its geological violence, wind, rain and erosion. He said, “When you put a few people in a powerful, natural environment like this you get more of what this area provides which is a tremendous amount of grinding, grating and breaking – destruction. There’s a lot of destruction that goes along with constructive things.” Said Gregory, “It’s the way things are supposed to be.”

The vulgar language used by John Eastman in the video reflects poorly on himself as well as the Town Council – not to mention him representing the citizens of our community. Very unprofessional and childish – it unfortunately speaks volumes for his two decades tenure on the Town Council. It… Read more »

Another opportunity for Rick Wood and John Eastman to offer up their version of revisionist history to absolve their legacy. Never mind the fact that it was their arrogance and ego over this two decade saga that led to the airport debacle. Over these two decades, all policy decisions regarding… Read more »

The people of Mammoth Lakes kept electing them. Who’s falt is it really???

Did any of you think it may be a flaw in our system? There are three positions up. In order to get one out ,you need 4 candidates in the run. If you want both out you need 5 candidates. The past few years few would run because of the… Read more »

What the heck was RG saying at the end there? And Jeez, you’d think he’d use a little visine before he was interviewed. But seriously, what a difference, Mr. McCoy versus our town leaders of today. This group’s plan seems to be more developement, while waiting for some good luck.

not sticking up for whatever it was he said, but it appears he has a bad case of rosacea, which can also affect the eyes…I say give the guy a break on that…after all, it’s obvious no-one wore makeup when filming this video.

The link in your article to the said documentary is not the right URL, just FYI. Thanks.

Thank you. I re-entered it, and it seems to be working now. Try it again.
Benett

Zeus has spoken from the mountain of the gods. Enlightening the demigods and mere mortals below him with his knowledge and command of the ages. Rusty, aren’t there some toilets to clean before June opens?

“…said the way out of Mammoth’s money pit is growth and development…” But isn’t that attitude what got the town in trouble in the first place. Build anything — sell everything. You’d think someone of those people mentioned would at least begin to see the fallacy of perpetual development. But… Read more »