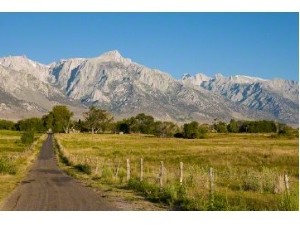 On April 2, 2013 Mr. Martin Adams of the Los Angeles Department of Water and Power addressed the Inyo County Board of Supervisors about the Owens Lake Master Plan, which was a collaborative process that had been underway for several years, and involved people representing many interests and concerns about the Lake.  DWP’s stated goals are to reduce aqueduct water usage on the Lake by 50%, maintain the current level of dust mitigation (instead of completing the dust mitigation as defined by the Air Pollution Control District), and to retain some habitat that has been created by water-based dust control measures.  In order to do this, they have unilaterally decided to create their own plan with a list of “must haves”, including an easement to have permanent control of the lakebed, and the right to pump water from under the lakebed.

LADWP acts like they are in charge, and have the authority to take these blanket actions.  The facts are:

Mr. Adams characterized Owens Valley water as only one piece in the thickening California water supply game, saying that increasing export of our water will decrease the City’s need for water from the Sacramento Delta.  This attempt to create a false sense of duty toward the rest of the State is dismantled by logic.

The Owens Valley has already sacrificed much of its environmental and economic health for Los Angeles.  We are a resource colony and have been for a hundred years.  There is no need for us to feel an obligation to the rest of California.  Our duty is to the remaining plants, animals and people that live in Inyo County.  We’ve done enough.

And most importantly, no amount of water from the Delta or anywhere else will suffice for the future until Los Angeles deals with growth.  It is the height of irresponsibility to continue to approve developments that increase the demand for water anywhere in the Southland.  It is a desert.  In the face of climate change, with the reduction of the Sierra snowpack, it is imperative that the State legislators reform local planning to cut the stranglehold developers have had on California’s planning process.  Until that is done, any water wheeling and dealing is grasping at straws.

The City of Los Angeles DWP has also masterfully employed the divide and conquer technique; pitting interest groups against each other through this Owens Lake Planning process.  Always implied, never stated, is that aqueduct water “freed up” from use on Owens Lake can remain in the Owens Valley for ranches and other uses.   Ranching and stock water has been intentionally and punitively reduced in the last several years, as the City has attempted to gain support for their Owens Lake position.  They can’t do that unilaterally, and here is why.  Ranch lessees are protected several ways by the 1991 EIR and Water Agreement.

First, the Agreement provides that,

managed to avoid causing significant decreases and changes in vegetation from

These lands CANNOT be converted to less water-dependent vegetation.  LA may argue that these lands were mapped, and that their reductions in irrigation comply with the mapping.  That process was not precise, as a study of the maps accompanying the Water Agreement will easily show.  Plus, the EIR states, “Should it be determined, through ongoing monitoring, studies or analysis, that vegetation is incorrectly classified, it will be reclassified as appropriate.”  Also, even if some of the lands recently cut off from irrigation by LA are incorrectly mapped as different types than Type E, it is not permitted in the Water Agreement and EIR to convert to a drier type of vegetation.

Further, lands that were supplied with water in the 1981-82 runoff year are included in Type E vegetation definition, mapping or no mapping, as this language in the EIR indicates,

Lands to be supplied with water will be managed so as to avoid causing significant decreases and changes in vegetation from conditions that existed on such lands during the 1981-82 runoff year….

The Agreement also provides that significant decreases in recreational uses and wildlife habitats on such lands (which in the past have been dependent on water supplied by LADWP) are to be avoided.

In dry years, the Technical Group has to analyze the conditions, and “reasonable reductions” can only be implemented if approved by the Supervisors and LA, through the Standing Committee.  In summary, if it was watered in 1981-82, it should be receiving water today.

Second, the 1991 EIR specifies 5 acre feet for irrigated lands, not 3 acre feet as DWP does when they put in sprinklers.

Why is this important?  Sprinklers deliver water only to the area of production, not ditch edges, or areas around the field as flood irrigation does.  Trees and shrubs grow along ditches creating places for animals to feed and take shelter.  Runoff water is NOT wasted.  It goes beyond the production area to nurture additional plants and animals, and grass for livestock.  Watch out, as the DWP told the Supervisors that they will be “working with” the ranchers to implement water conservation on the leases!

Third, LA is prohibited from implementing changes in surface water management, if such changes result in a significant effect on the environment.  Obviously, changing irrigation practices from flood irrigation to sprinklers, or cutting back irrigation to Type E lands results in vegetation changes.  This is happening incrementally throughout the Valley.  Is this “significant” in the meaning of the Agreement and EIR?  Absolutely.  This is the language in the Agreement regarding whether an effect is “significant”,

Determine…whether effects of the decrease, change, or effect are limited, but the incremental

management practices by the Department;

And here is how the 1991 EIR addresses the issue of flowing wells and springs;

Certain areas that contain vegetation of significant environmental value are not shown on the management maps.  These areas will be identified by the Technical Group for monitoring purposes. Such areas may include riparian vegetation dependent on springs and flowing wells, stands of willows and cottonwood trees, and areas with rare or endangered species. If, through field observation, monitoring, and other evaluations, it is determined that groundwater pumping or changes in surface water management practices has resulted in severe stress that could cause a significant decrease or change in this vegetation, such action will be taken as is feasible and necessary to prevent significant impacts and to reduce any impacts to a level that is not significant.

The incremental changes that LA is implementing throughout the Valley include:

There are probably other actions going on, hard to monitor because of the vastness of the Valley.  Taken together, these changes are more than significant, they are an enormous impact to the Valley’s plant and animal diversity, since water is the key element.

The reductions in irrigation water are destructive not only to the natural environment, but economically disruptive to the agricultural community.  Ranchers and farmers are important contributors to Inyo County’s economy, as well as stewards of the land.  Despite the promises of the EIR and Agreement, the ranchers and farmers are taking the hit again, as they did when the second aqueduct began operation in 1970.

This is unfair and wrong.  They are our friends and neighbors, and their entire livelihood is at risk if they don’t receive the water that the Agreement and EIR promise.

Remember, citizens, the Water Agreement itself is a mitigation measure designed to offset the effects of groundwater pumping.  If every aspect of this Agreement and the EIR are not upheld, then the Owens Valley has suffered a magnified loss – first the surface water is exported, then the groundwater is pumped, and, most egregiously, the very legal documents designed to protect what little remains are ignored.  These documents are not “living documents” – the Court of Appeals approved them on June 13, 1997.  Let’s make sure that the Agreement and EIR are followed to protect our ranchers, our economy and the environment.

Good Job, and Thank You Nancy.
Now if only Tribes could become a force to be reckoned with like the ranchers are, I would like to think that ship hasn’t sailed??

Wow, a whole new can of worms.

Thank you, Nancy. Only one correction. LADWP has been very clear in the Planning Committee meetings that the water “freed” from dust mitigation at Owens Lake would continue to Los Angeles. There was always discussion from members to encourage a portion of the savings to remain in the valley (ranchers… Read more »