Mammoth Lakes, Calif. – Mammoth Lakes Repertory Theatre (MLRT) and Artistic Director Shira Dubrovner announce the opening show of the 2016-2017 season, and it’s a hilarious one. Exit Laughing was a winner of AACTNewPlayFest in 2014, premiering at the historical Landers Theater in Springfield, Missouri where it broke all records. 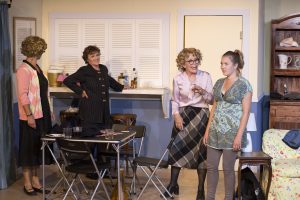 A little like “The Golden Girls” meets “Magic Mike,” Exit Laughing hasn’t looked back since its debut, and promises to be a jolt of laughter to the local theatre scene in Mammoth Lakes and the entire Eastern Sierra when it opens at the Edison Theatre September 1st.

“I’m very excited about the 2016-2017 season,” stated Dubrovner, “It’s going to be a wild ride. From Exit Laughing all the way through to the Mammoth Lakes Film Festival, it will present locals and visitors alike with a wealth of opportunities to experience the highest level of entertainment. We have productions that feature talented locals, some talented working professional, film festivals, and surprises.”

The first show of the MLRT season is being directed by Juliana Olinka and stars locals Lesley-Anne Hoxie and Matt Chaconas, Bishop residents Eva Poole-Gilson and Marlene Piper, and June Lake’s own Alice Suszynski.

“I love this cast and this script,” stated director Olinka. “The characters and the story are so well written. Comic timing, genuine emotions and honest reactions are essential to making this story entertain—and the script and the cast have it all.”

Dubrovner added, “Eve Poole-Gilson brought this script to my Artistic Council (including Dubrovner, Olinka, Jo Bacon, Mary Walker, Noelle Deinken, Cathy and Richard Foye) two years ago and we all loved it. We waited until this year so we could give it a premium spot in the schedule to allow it to really shine. I’m especially excited to have it launch what promises to be our best season yet.”

Set in the present day South, Exit Laughing centers on the 30-year friendship of four ladies, one of whom has recently and unexpectedly passed away. The story by Paul Elliot takes a rib-tickling approach to death and friendship, relationships and memory that will have everyone who attends also exit laughing.

Tickets are available online at www.MammothLakesRepertoryTheatre.org for $20 general admission, $18 for seniors and students, or $22 at the door (sorry, no discounts). This production contains some adult language and a funny striptease, so we are rating it PG13.

The second show of the season at MLRT is Shakespeare’s Romeo and Juliet set against the backdrop of Pre-WWII Germany, directed by Dubrovner. The production stars Skylar Simpkins and Marcelle Bouchard as the star-crossed lovers in this innovative spin on the classic story. Rome and Juliet runs October 6th through 23rd.

This November’s Theatre for Young Audiences production, presented free to K-5 students from Coleville to Lone Pine, is Stellaluna, produced by Dubrovner and brought to life for MLRT by Ouroboros, a shadow picture company based in Oakland, CA.

If you attended the Opening Night party of the 2016 Mammoth Lakes Film Festival, you had the pleasure of experiencing their unique storytelling ability. Students will not only experience the well-known and loved story of the bat Stellaluna, they will go behind the scenes to see how Ouroboros creates their story-telling magic.

The December holiday show this year is New York’s longest-running Off-Broadway musical Fantasticks that plays from December 15th through December 30th. Dubrovner, who directs this production, puts a post-apocalyptic spin on the presentation that is sure to entertain. Fantasticks features songs like “Try to Remember” and “Soon It’s Gonna Rain.”

Squeeze My Cans is an amazing one-woman show presented January 14th and 15th only. This is the shocking and hilarious true story of writer-performer Cathy Schenkelberg’s 14 year journey in and out of the control of the Church of Scientology; a courageous, hilarious and horrifying story. “…the play is consistently dynamic and funny. The audience was laughing throughout the hour-long performance. I’m sure that in the writing this took quite a bit of pride-swallowing to accomplish—and that is Schenkelberg’s real tricky triumph,” Emily Johnson, Around the Town Chicago.”

Intended for mature audiences; January 14th and 15th only.

Then, from February 9th through 19th get your deerstalker cap on—the play’s afoot! when Mammoth’s favorite L.A. actor Brian Stanton returns to star alongside a talented cast in Baskerville: A Sherlock Holmes Mystery. Written by the award-winning mastermind of mayhem, Ken Ludwig (Lend Me a Tenor), comes a fast-paced comedy about everyone’s favorite detective solving his most notorious case.

Sherlock Holmes and Dr. Watson must crack the mystery of “The Hound of the Baskervilles” before a family curse dooms its newest heir. “Baskerville is a madcap sendup of what you might hold dear about that Doyle classic, done up in the style of The 39 Steps.” – DC Theatre Scene; directed by Drina Durazo.

In March plan on two events, Todd Offenbacher’s Tahoe Adventure Film Festival returns for two shows on March 11 only. “The next best thing to doing it” film fest is followed by the fourth annual March Magic weekend of extraordinary magic. Watch a new master of sleight of hand and illusion blow your mind!

For more information about the season visit the theatre’s website at MammothLakesRepertoryTheatre.org.