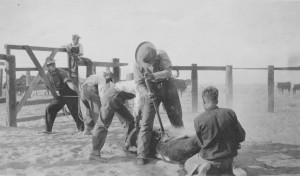 Wehrey’s book is one of the few works that present, in one volume, a thorough overview of all aspects of the storied history of the Owens Valley, which stretches from the native peoples, pioneering settlers, the mining era, the development of towns, the appearance and impact of the Los Angeles Department of Water and Power, through the more recent past that includes the development of a tourist and recreation economy in the valley.

Wehrey cast a wide net to find images that would imaginatively convey the rich history and life of the region. The result is a selection of more than 210 historic photographs, maps, and advertising graphics. Familiar, iconic Owens Valley images are used alongside others previously unpublished. Nearly two-thirds of them are from the treasure trove of 25,000 or more historic photographs at the Eastern California Museum in Independence. Other sources include the private collections of local residents and professional photographers working in the area, together with archives of other museums (Laws Museum, Lone Pine Film History Museum, Maturango Museum), government agencies (National Park Service, Los Angeles Department of Water and Power), and universities (California Institute of Technology, Loyola Marymount, Deep Springs College, UCLA).

The images are intended to provide windows into the special relationship of the valley’s varied people to the dramatic environment they have called home for centuries. The presence and history of multiple ethnic groups, pivotal individuals, places, events, livelihoods, and conflicts weave through the book’s eight chapters.

A section on the valley’s early communities suggests how frontier outposts and mining camps grew up and evolved into settled towns and civic identities and considers why some promising boomtowns soon disappeared while other communities have thrived to the present day?

The Owens Valley chronicles the region’s dramatic shifts in fortunes and livelihoods in the early twentieth century in two chapters that focus on the inception and building of the Los Angeles Aqueduct and the “water wars” that followed, and on the profound social and economic shifts that marked a “new era” through the mid-twentieth century.

A favorite chapter, “Vacationland,” uses captivating images, maps, and period advertising to chronicle the development of the tourism and recreation industry in the Owens Valley, while another section takes the reader on a journey through history along Highway 395 to discover its meanings in local life and as a link to a more urbanized world beyond the valley.

A short chapter examines the unique accomplishments and contributions of representative individuals, groups, and organizations, and how they have been inspired by the natural environment and history of the Eastern Sierra.

Frequent mention is made of the contributing photographers, both professional and amateur. Many, such as Andrew Forbes, Allen Ramsey, and Curtis Phillips, lived and worked locally, while others—Dorothea Lange and Toyo Miyatake, among others—came to document well-known episodes in the valley’s history, such as the World War II removal of 10,000 ethnic Japanese from the West Coast to the relocation center at Manzanar, and, earlier, the construction of the Los Angeles Aqueduct.

Long-time residents will find much that is familiar in the book; they may even spot themselves, family members, or friends among the activities of “local life.” But visitors, too, will be drawn into the remarkably rich life of this “long brown land” through the past 150 years and may discover a more varied, complex, and colorful past than they had imagined.

Jane Wehrey is a historian and native of the Owens Valley and now lives part time in Independence. She grew up in the valley and in the Los Angeles area and is a graduate of Lone Pine High School. With a family history in the valley that dates to 1919, her interest in its past is both personal and professional.  She is the author of Voices From This Long Brown Land: Oral Recollections of Owens Valley Lives and Manzanar Pasts (Palgrave Macmillan, 2006) and Manzanar (Arcadia Publishing, 2008).

Wehrey graduated from Occidental College in Los Angeles with a BA in English and, after an earlier career in music, earned an MA in History, with Public History emphasis, from California State University Fullerton. As a research associate with the CSUF Center for Oral and Public History, she headed a series of research and oral history projects for the National Park Service as it developed the former Manzanar War Relocation Center as a National Historic Site starting in 1992. She was an advisor on the documentary film shown in the Interpretive Center. She is a co-author of  An Annotated Bibliography of Manzanar National Historic Site and, together with Jefferey Burton and others, Three Farewells to Manzanar: The Archaeology of Manzanar National Historic Site. From 2004 to 2008, she was an interpretive Park Ranger with the National Park Service at Manzanar.  She continues to lecture and write on Owens Valley and Manzanar history.

We work to provide daily news to all of the Eastern Sierra, in the tradition of Eastern Sierra News Service and the Sierra Wave. We bring you daily happenings, local politics, crime, government dealings and fun stuff. Please contact us.
View all posts by News Staff →
Bureaucrat Beat: Ocean everywhere, drones too and a for-sale scientist?
LADWP demands hit Owens Lake Master Plan meeting