By News Staff on July 1, 2021 in Fire, General Misc. Stories, News Releases, Press Release, United States Forest Service
While we are all accustomed to seeing helicopters taking water from lakes and streams during fire operations, they can also be used to apply fire retardant, says the Inyo National Forest in a press release.
On the Inyo Creek Fire, 106,000 gallons of retardant was applied via helicopter to the fire. This is the same red material that we commonly use fixed-wing aircraft (Air Tankers) to apply. This is achieved using Mobile Retardant Bases. Some Mobile retardant bases are sized to support helicopter operations in more remote areas while others are sized for Single Engine Air Tankers (SEATS), and traditional fixed wing tankers, and must be established at appropriately sized airports. 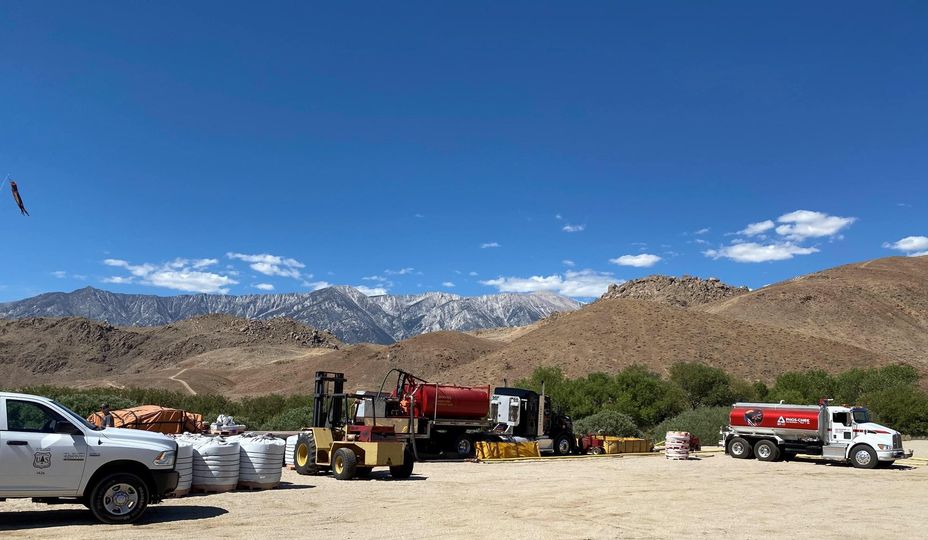 What is Retardant: Comprised of Ammonium Phosphate plus additives that make it work better, fire retardant changes how fuels (leaves, grass, brush) interact at a chemical level. Wildland fuels depolymerize into flammable compounds. In the presence of fire retardant, cellulose dehydrates into water vapor and nearly pure carbon. The heat from the fire is absorbed by the reaction between the retardant and fuels, decreasing fire temperatures and slowing spread of the fire. Retardant stays effective until it is washed off by rain, which allows fire managers to apply retardant well ahead of a fire. 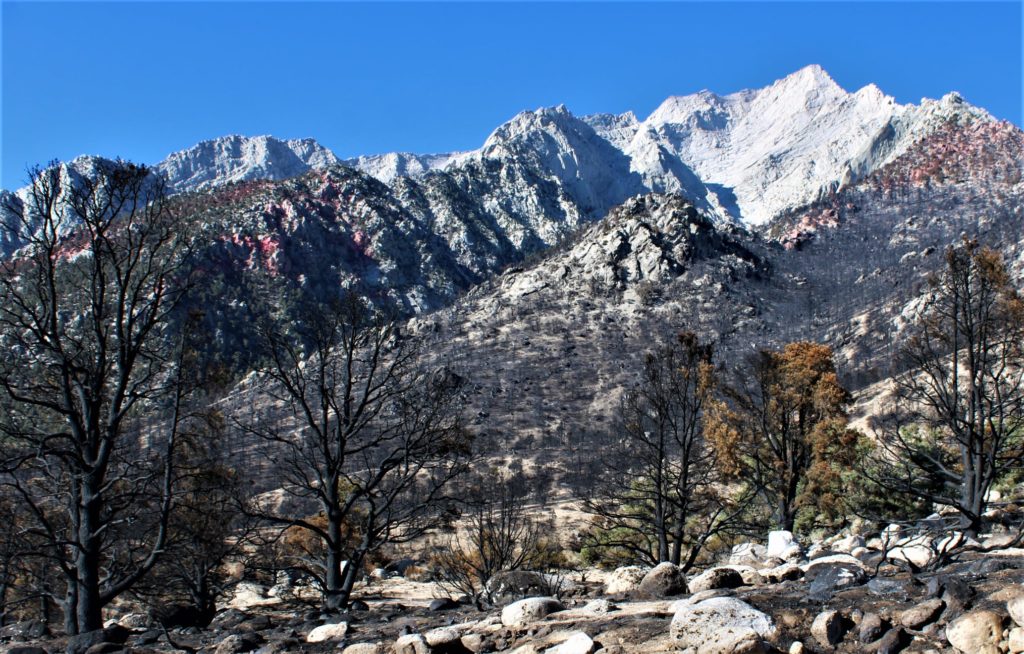 Red Fire Retardant stains can be seen in mountain area vegetation in the background. It is used to prevent the spread of fire. This photo from The Gateway to Mt. Whitney FB group is from the Inyo Creek Fire.

Water, which makes up 85% of the mixture, is only the carrier of the retardant. The red dye fades after several weeks of sunlight.
Mobile Retardant Bases designed for helicopter use can produce 21,000 gallons of retardant per hour and can pump 300 gallons per minute into fixed tank helicopters. For helicopters that can draft from open water sources, a 5000 gallon or larger open tank is used. A second rinse tank is required to prevent retardant from entering waterways in the event the same aircraft switches to drafting from natural water sources. Retardant is thoughtfully applied, and pilots and fire managers must use retardant avoidance maps to prevent the misapplication of retardant into waterways and environmentally sensitive areas.
For more info on the Inyo Creek Fire, which is close to being fully contained, visit InciWeb at: https://inciweb.nwcg.gov/incident/7564/

Mr Jones should join your local volunteer fire dept. Where you will get a first hand look at how beneficial retardant can be. The amount of land that can be saved by using retardant is mind blowing with today’s tools. Retardant also has aids that can act as fertilizers to… Read more »

FWIW, I am familiar with the fire retardant and I believe the benefits clearly outweigh the risks.

Commenter John Sexton is not wrong about fire retardants being toxic. The most common one in use, Phos-Chek, contains ammonia and phosphate, both of which can be harmful to the environment and to firefighters. Two problems brought out with these chemicals are that they have resulted in fish-kills and some,… Read more »

Then provide quotes describing how it does work. Got it.