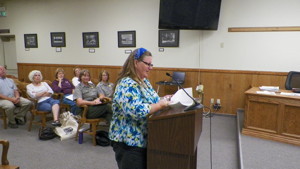 Suzi Dennett, Death Valley Chamber of Commerce President, spoke of the major loss of business revenue and lack of consideration by DVNP staff in coming up with new rules for special events.

Thanks to the actions of just a few National Park Service employees in Death Valley National Park, new Special Event Permit rules have been implemented as a result of a safety review ordered by Park Superintendent Kathy Billings last year. The Inyo County Board of Supervisors were dismayed to learn of the new changes at a recent board meeting when it was announced by Billings as “A done document.”

The result of the safety review, during which the park was closed to events, has seriously changed the way running and biking events can now be held inside the park.

According to a press release last December from AdventureCORPS, a major extreme athlete event provider in the park, which has hosted the world-famous Badwater Ultramarathon in the park for 37 years without incident, stated that the changes were made “despite there never having been a major illness or this ‘safety review’… being undertaken as a result of any serious incident or accident within the Park. It is not being undertaken as a result of any significant number of complaints.”

That’s right: there was no long list of complaints or record of injuries in the park during special events. AdventureCORPS, in its statement said “It was undertaken purely under the prerogative of a few DVNP employees, most notably the Park Superintendent, Kathleen Billings, who assumed leadership of the Park in March of 2013.”

The major stakeholders, which include Inyo County, the Death Valley Chamber of Commerce and AdventureCORPS, were deliberately excluded from the process according to Park Superintendent Billings at the direction of an unnamed supervisor from the National Park Service despite assurances given to the Supervisors while in Washington last February during a meeting with National Park Service Deputy Director Christina Goldfuss. She assured them that the new permitting process would be open and the county would have an opportunity to participate.

Furthermore, Billings admitted that the process chosen was also designed specifically to exclude public comment, at one point telling the Supervisors that, “Having events in the park is a privilege, not a right.” The new rules state that any summertime events in the park would be cancelled if temperatures rise to 110°F and that special events are to be held during a full moon to preserve the park’s famously dark skies.

The rules were made solely by park service staff under the hypothetical approach of “What if?” and not based on any empirical data or evidence from the park itself. The result was a “wish list” by park service staff being inflicted on unsuspecting stakeholders that use the park to stage events. It is estimated that the park closure while the “safety review” was being conducted, and the implementation of the new regulations, has already cost the County and local Death Valley business owners, who are struggling to stay afloat, hundreds of thousands of dollars in potential losses which they can ill-afford.

The Lone Pine Chamber of Commerce said that the Badwater Ultra Marathon alone was responsible for contributing $1.2 million to local communities each year. Suzi Dennet, the Executive Director of the Death Valley Chamber of Commerce, told the Inyo Supervisors that she and chamber members were very upset about how the safety review was conducted. It is especially disturbing to be ignored, especially as they have always tried to work closely with the park’s staff to provide the best services to park visitors.

The new rules may also result in a loss to Inyo County through lessened Transient Occupancy Tax income. It is the County that maintains many of the roads that lead into the park.

After creating the current fiasco by ignoring everyone but her own park staff, Park Superintendent Billings is leaving the park service and a new job announcement for her replacement has already been posted.

Eighth Congressional District Congressman Paul Cook’s office was contacted for comment two weeks ago about the situation, but as of this writing has not responded. Local county residents can contact the congressman by calling his Washington office at (202) 225-5861 or visiting his official website at http://cook.house.gov, to express their concerns.