ESWC Mono volunteers Trina Jennison and Mike Aguirre rescued a juvenile Turkey Vulture not far from the large vulture nighttime roost in Sunnyslopes on September 27th. He reportedly couldn’t fly but led the rescuers quite a chase on foot. Finally, Mike was forced to jump into the stream to capture the young scavenger. 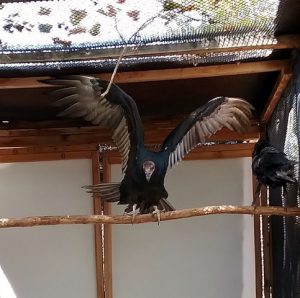 At the Center, no injuries were found but there was a slight weakness in one wing. The dark-faced vulture spent two days in a recovery cage; there were no vacant flights available and he was moved in with two Ravens. No one was particularly happy with the arrangements.

Migratory pressures were growing as vulture communities “kettled” up and headed south. ESWC sent out queries to Sunnyslope, Round Valley and the Bishop area, looking for a roost that was still occupied.

A flight cage opened up at the Center where our young patient could strengthen his wings, but we were coming up short in finding an occupied roost where we could release him.

The morning of October 5, Assistant Director Kelly Bahr spotted a large kettle of vultures sailing high over Tinnemaha and reports came in that the Sunnyslope roost was deserted. We sent calls southward to Independence and Lone Pine and just before 5 pm, volunteer Janice Pedersen reported that at the Independence roost, some birds were coming in although many had left that morning. “We need to get going right now,” decided ESWC director Cindy Kamler.

Quickly, Kelly put him in a transport carrier, loaded him into her car, and headed south. The hope was that he would join the Independence group that night and take off with them in the morning.

Sunlight was just touching the top of the roost trees when our young vulture jumped from his carrier. Kelly watched as he flew across the field and into a tree next to one with 10-15 adults settling in for the night. Our first critical timeline had been met!

In the morning, not a vulture was to be seen. Had they headed south or gone out to scavenge? That evening, the roost area was deserted. Success. The second timeline had been met. Our young one had joined the group just in time to accompany them as they began their migration.

Shorter, cooler days tell the birds it’s time to act. Those same days have been telling Eastern Sierra Wildlife Care that the time for our annual Wild Spirits fundraiser is rapidly approaching.

On October 23, for the eleventh consecutive year, ESWC will hold a two-hour celebration of Eastern Sierra wildlife at Mountain Light Gallery, Main and Line, Bishop.

Take some time to check out the Reptile Display, watch the wildlife rehab slide show, and draw a door prize ticket. Donation at the door is $15; children 12 and under are free.

Become a Wild Spirits Sponsor, donate a silent auction item, and make it to the Mountain Light Gallery on Sunday, October 23, 6-8 PM.

Now while the buzzards are gone would be a good time for the concerned residents of Sunnyslopes to think about what they might be able to do that would convince the birds to roost elsewhere when they return. Having trees full of vultures next to your house isn’t an ideal… Read more »