Lots of baby birds have started to hatch, and in recent days infant Great Horn Owls needed help or all out rescues. Eastern 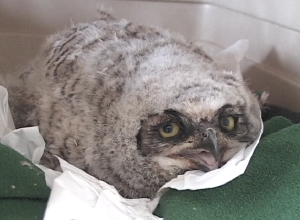 Seems some of the little owls were attacked by ants in their nest. ESWC helped a number of baby owls. Volunteers hope to soon release three of the infant owls back to their nest. The others may grow up at the ESWC facility near Keough’s. They will be released later. 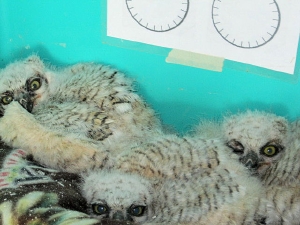 from a CDF crew at work down by the Owens River. A baby owl had fallen out of a nest. Kamler said the baby had a lot of ants on him. She noticed a huge infestation of ants at the base of the tree, heading up to the owl nest. “I was afraid the ants were invading the nest and the baby jumped out too early.” A volunteer, Dimitri Barton, is a tree trimmer. Kamler said he went up a difficult climb, constantly attacked by ants. He reached into the nest and rescued two more babies.

After that, Kamler received a call from the Birch Creek area near Big Pine. An owl had fallen out of a nest. That baby bird also ended up at ESWC for now.

We work to provide daily news to all of the Eastern Sierra, in the tradition of Eastern Sierra News Service and the Sierra Wave. We bring you daily happenings, local politics, crime, government dealings and fun stuff. Please contact us.
View all posts by News Staff →
Hundreds support Big Pine fire survivors at Saturday dinner
Hispanic Advisory Committee meets Tuesday