By News Staff on September 18, 2013 in Government Agencies/Utilities

At Eastern Sierra Wildlife Care’s hospital, most wild birds and mammals arrive with injuries from a wide variety of causes—fractured wings and legs from vehicle hits, head injuries from impacts with cars or windows, lacerations from cats and dogs and fishhooks. 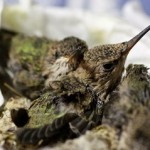 Baby animals fall from nests or are dug up by dogs, separated from their moms or moms are killed. We examine and diagnosis their problems. Some can be helped, some cannot. And sometimes, miracles happen.

On July 30th, a rescuer arrived at the Center bringing 3 nestling Black-chinned Hummingbirds spotted lying on the ground; their nest couldn’t be found. Hummingbirds have a high metabolism and must feed about every 20 minutes to survive.

The three were weak and dehydrated and weighed in at 2, 2, and 1 gram. One was nearly gone; the other two were a little stronger. It would take a miracle to save them—and this time a miracle did happen—almost right away! Making sure they were warm (they couldn’t spare energy to keep themselves warm), we fed the trio a formula specially designed for hummingbirds. Still in their tiny pinfeathers, eyes barely opened, they began to rally.

The smallest one improved more slowly. Taking formula every 20 minutes or so, the little guys were alert and full of life by the end of the day—and they never looked back. Last week, weighing a hefty 3 grams each, they traveled in their cage back to Dave McCoy’s place in Rocking K where they had been born.

The cage door was opened and, one at a time, the three small emerald-green miracles ventured out into their big world to ready themselves for migration to Central America.

Six months ago, on April 15th, Kristin Carr spotted a Western Screech Owl on the steps of Home Street School. She made a call to Eastern Sierra Wildlife Care and within an hour the small owl was examined at the wildlife hospital and found to have damage to both eyes. 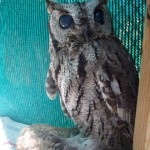 We treated her eyes for several weeks with some improvement but it appeared that her eyesight was permanently impaired. She could get around in a small space and find her food but her flight was limited. We entered her in lists for placement in approved facilities, hoping some zoo or wildlife education center would want her. Time passed; we needed her space for another patient and moved her into a new and larger place.

She was able to find her food and we thought: “Her eyesight is a little better than we thought.” A place in Wisconsin wanted her but we were reluctant to put her through such a long and difficult trip.

Again, we needed her space and moved her to a yet larger, improvised cage where she found her food right away; in a test flight, she flew and landed with apparent control. We began to hope. Maybe she can be released? When one of our largest flight cages (22 feet long) became vacant, we hung tree limbs at various heights and distances apart to make a challenging environment. She moved in and found her way around with ease! We offered her live mice to hunt and she was successful. It was another miracle—a miracle that took 6 months—and in a week or so, our tough little Screech Owl will once again be living wild and free.

Thank you for this story, Mongo loves animals.