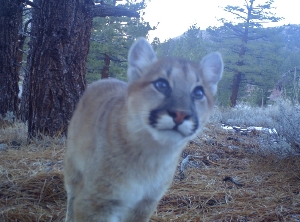 Bishop, CA— Have you ever wondered what wildlife might be doing when you aren’t looking?  Eastern Sierra Land Trust set out to learn more this year and “capture” some of the wild visitors and residents of the important and diverse area known as the Round Valley mule deer migration corridor.  With a small grant from the Norcross Wildlife Foundation, ESLT purchased a motion sensor activated camera and stationed it for weeks at a time on conservation easement properties and public lands located within this rich wildlife habitat.  Over a period of five months, ESLT documented 15 different species with this camera, ranging from the tiny deer mouse to the tawny mountain lion. 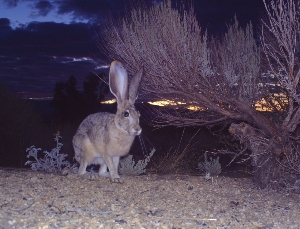 use to travel between different types of crucial habitats.  Commonly, migration corridors link winter ranges where wildlife can avoid deep snow and find food to summer ranges where wildlife breed, give birth, and regain strength by consuming abundant plants or other nourishment.  A diversity of healthy habitats and wide open spaces ensure that wildlife can find mates, food, and room to roam.  Locally, migration corridors in the Eastern Sierra are used by insects such as monarch butterflies, large mammals who travel long distances such as mule deer, small mammals such as silver-haired bats, and many bird species such as osprey, American robin, rufous hummingbird, and Western bluebirds.

Many wildlife species may reside within a migration corridor and spend their whole lives there.  They may have a small range such as a black-tailed jack rabbit or sagebrush lizard.  The grey fox spends its life in a small two-mile diameter home range, living opportunistically on wild fruit, insects, reptiles, and rodents.  Black bears living in the wild are active in summer and fall, often traveling miles a day in a food gathering circuit.

Migration has been called a “spectacular biological event” with even greater ecological significance.  Wildlife migration corridors provide many benefits to wildlife: access to snow free habitat, linkages to mating and birthing grounds, and a better chance at survival through connections to a larger gene pool.  Scientists are finding that fencing, highways, housing developments, energy development, wind turbines, and climate change threaten this amazing phenomenon. Here on the wild side of California, wildlife migration may not be completely secure but we’re lucky to have many interesting and beautiful animals utilizing the special habitats of our local migration corridors.  Check out www.eslt.org for a photo gallery of wildlife species “captured” this year.

Caption 1:  Black-tailed jackrabbit poses for a sunrise portrait by the motion-sensor camera.  These hares are important prey species but they can run up to 30 miles per hour and jump 20 feet in one leap.  Photo credit: Eastern Sierra Land Trust

We work to provide daily news to all of the Eastern Sierra, in the tradition of Eastern Sierra News Service and the Sierra Wave. We bring you daily happenings, local politics, crime, government dealings and fun stuff. Please contact us.
View all posts by News Staff →
Dennis Mattinson’s Weather Forecast
MLPD recruits officers
4 Comments
Newest
Oldest Most Voted
Inline Feedbacks
View all comments

What a waste of money!

Angry Andrew, take a walk on the wild side and chill out.

There’s more game cameras out there then you can imagine. I have three I have had in the same location for several years. Mine are located in a dry area where I provide a guzzler for wildlife. The guzzler holds about 150 gallons. During summer months the critters go through… Read more »