The Eastern Sierra Land Trust (ESLT) will soon begin offering a new history based evening program titled “Life Upon the Land” for visitors and residents to the Eastern Sierra. ESLT’s very popular “Community Connections Program” has been keeping residents of the Eastern Sierra informed about topical subjects ranging from home composting to night sky viewing for many years.

The program talks about how the Owens Valley and Eastern Sierra, with its warm summers, abundant water and fertile soil, made for an attractive location to a number of farmers and ranchers that settled here in the mid -1800s. These early pioneers and settlers planted crops and raised livestock in hundreds of locations throughout Inyo and Mono counties and the towns soon grew up around them.

Agriculture still plays an important role in the area’s economy though outdoor recreation is now the primary industry of the Eastern Sierra. The magnificent open spaces and sweeping vistas now attract visitors and residents alike. Many area ranches, farms and businesses have been owned and operated by the same family for years. History of the land and its people runs deep in the Eastern Sierra.

The program will be presented 137 South Main Street in Bishop (the Inyo Council for the Arts building) on Thursday August 4th at 7:30 p.m. Additional programs will be offered in the weeks following. Eastern Sierra Land Trust is a non-profit organization that works with private landowners to preserve vital lands in the Eastern Sierra region for their scenic, agricultural, natural, recreational, historical, and watershed values. For more information call (760) 838-4554 or visit www.eslt.org. 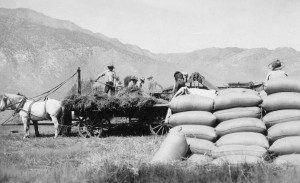