MAMMOTH LAKES, Calif. — On Labor Day evening, September 5, a small fire broke out just north of the Mammoth Scenic Loop, named the Scenic Fire. The following day, investigators officially concluded the fire was caused by an illegal campfire that had escaped. 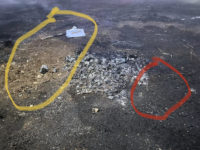 U.S. Forest Service firefighters responded to the fire, reported by a visitor passing by on their side-by-side, where they were able to contain it to a quarter-acre.

During the second operational shift however, the fire spotted an additional quarter acre approximately 200 feet away from the main body of the fire. It was detected and quickly contained by 9:00 a.m. before it hit a patch of dried-out tree snags.

Firefighters will continue mopping up and inspecting the fire daily for any hot spots for several days before declaring the fire “controlled and out.”

“With extreme heating temperatures and relative humidities dropping to single digits in the afternoons, any human-caused wildfire has the potential for large fire growth,” said Acting Fire Chief Chance Traub.

“We want to reiterate how important it is to follow our fire restrictions. When the winds come, fires like these could turn into something much worse.”

Inyo National Forest firefighters are greatly appreciative of the interagency efforts contributed by the Mammoth Lakes and June Lakes Fire Departments, and cover resource engines from out of the state who also assisted on this fire.

Ahhhh, beautiful So. California! Clean uncrowded beaches, easy access to outdoor recreation, cute little small towns, fantastic freeway system and nice respectful people. Who would hate a great place like that? Oh sorry, that was in the 1940’s and 50’s. The population has tripled since then, and just to get… Read more »

Dispersed camping isn’t illegal, it is having a fire during fire restrictions that is illegal.

With the amount of careless SoCal “travelers and campers” up there every day of every week through the Spring,Summer and Fall,especially the last couple years,and my bet,from now on,it’s a wonder this type of thing doesn’t happen every single weekend,caused by illegal campfires in areas they-‘re probably not supposed to… Read more »

I heard it was an old man from Elko, Nevada, that was completely sober….just kidding. But that is about as ridiculous as what you stated….your hate for SoCal is just odd. Maybe they are a basket of deplorables? Hhhmmmm

I agree. Dennison is always hating on tourists. True, some can be annoying, but they support a big part of our economy and most are nice folks. It is odd.

Jubie Driving HWY 395 speeding and driving up here like a nut like they do in L.A….and once they do get here, them and some living in the OV thinking and doing as they please O.K. to do, as long as they bring their money.. Some driving drunk,as the arrest… Read more »

Sounds like you’re going to the wrong places and have had bad experiences. Me, I go to out of the way places that are not the popular places for tourists. I rarely have to deal with that c$*@p.

It’s easy to avoid the masses.

Not EVERY tourist that supports the economy in the Owens Valley is from SoCal. . They come from all over the country . Do you think that the folks from from Phoenix , or Blythe , or Palm Springs don’t venture up 395 to beat the heat ? And I… Read more »

Rick Agreed. Not ALL coming from SoCal. and not ALL of them annoying, highway speeders and litter-bugs… Just ,what it seems,a good percent of them. Some of them,nice people coming here,respecting the area,the land and people living here. Just not enough of that type,or so it seems. And yep,many of… Read more »

Yup, out of 10 families on my street, 50% are from Orange County, course David isn’t gonna say where he came from, might give himself away. Is he sure 23 years makes him an accepted local? I think its 40.

Ask a Parent Give myself away ? To who ? But for your information,as if it matters much to me,I came down from Oregon.. And you can put some kind of numbered figure out there,letting me know when I’ll be “accepted”… Laughable…. Ask anyone in town that knows me much,see… Read more »

I would expect that on Labor day weekend, the USFS would be patrolling the dispersed camping areas every night. I don’t believe they do though. Be nice to hear from the USFS on what steps they take to police illegal fires in these commonly used areas. MLPD says it’s not… Read more »

I have never been approached by USFS personal in the evening while disperse camping.

Ask a Parent
Reply to  John

I have once, down by Lake Isabella. The ranger issued us a campfire permit because we were supposed to have one if we wanted a fire. It wasn’t during extreme fire danger time though.