Consecutive days of precipitation in the Owens Valley could be the definition of anomaly. Check out the National Weather Service website—rain/snow as far as the eye is allowed to see. 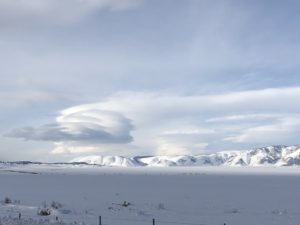 So, is this another winter of 2016-17? Is it time to start work on an Ark, prepare for another even more epic run-off?

According to Los Angeles Department of Water and Power Aqueduct Manager Clarence Martin, it’s too early to tell.

Martin did say, as of Tuesday, if we got not another drop of wet, we’d be average. In the rain shadow, average is pretty good.

The department is taking steps though, just in case, Martin said. Crews are clearing drainage areas and, generally, looking at the system. The biggest issue at this stage is the prospect of rain on snow, a combination that accelerates run-off.

Long-term weather forecasts don’t really play into the planning process since the jet stream that determines our weather can be very fickle. As Martin put it, weather forecasting is the only profession where you can be right half the time and still keep your job.

This snow season may not become epic, but the water numbers in LADWP’s current precipitation conditions report as of February 5th are still impressive. The thick red line for the 2018-19 rain season on the department’s weighted average of the valley’s snow pillows chart took a vertical jump in early February hitting the average high point.

The 2016-17 line, against which future years will be measured, took a similar straight vertical trajectory starting in late January of ’17, but it didn’t stop until it hit 50-inches of water in early March. So, at 146-percent of normal to date with 23-inches of water last week, we’ve got a way to go to before we hit Epic Run-Off.

Maybe human beings don’t strive to be average, but for the East Side, average rainfall is pretty good.

they said the Same Thing 2 years ago…

Just remember the warm New Years storm that rolled in after a record snowfall during the Christmas holiday up in Mono County back in 1997 . Highway 395 lost 10 miles of road, and dozens of folks from the town of Walker and Coleville lost their homes . CalTrans said… Read more »

A new jet stream web site . It is interactive and you will need to drag the image to the west coast and adjust the date/time from the Zulu (Greenwich mean time) which is 8 hours ahead of us