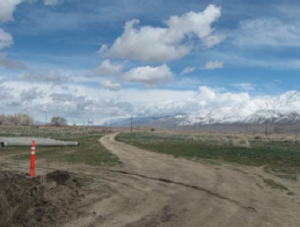 This area northeast of Big Pine was damaged by past LADWP pumping.

Bishop, April, 6, 2012 — The Owens Valley Committee (OVC), Sierra Club and Big Pine Paiute Tribe of the Owens Valley have partnered to challenge the Negative Declaration for the Big Pine Northeast Regreening Project certified by the Los Angeles Department of Water and Power (LADWP) March 6, 2012.  The three groups have filed suit in Inyo County Superior Court to overturn the decision to approve the project and to order LADWP to prepare an environmental impact report (EIR).  The groups contend that operating a groundwater pump to replace surface water supplied to the project may have significant impacts on the environment and that under state law LADWP is required to prepare an EIR to properly disclose and evaluate those potential impacts. 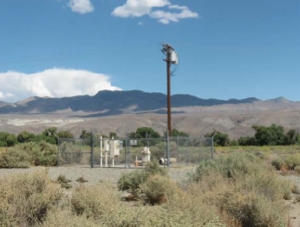 LADWP wants to export more water to make up for surface water used to mitigate damage done by pumps.

and groundwater-pumping activities by LADWP as identified in their 1991 EIR “Water from the Owens Valley to Supply the Second Los Angeles Aqueduct, 1970 to 1990 and 1990 Onward, Pursuant to a Long Term Groundwater Management Plan”.  A revised description for the project was agreed upon by LADWP and Inyo County in 2010.  The project provides for 30 acres of land northeast of Big Pine to be irrigated and seeded with a pasture mix to support livestock grazing.  The Big Pine Canal will provide up to 150 acre-feet of water per year for the Regreening Project.

The 2010 revised project description states that the irrigation is contingent on LADWP being allowed to pump Well W375 to replace (or export) an amount of groundwater equivalent to that supplied to the project each year from the Big Pine Canal.  Well W375 is located approximately three miles southeast of the Big Pine Northeast Regreening Project and has been in OFF status in accordance with the on/off provisions in the Inyo/LA Water Agreement for more than a decade due to insufficient soil water, deep water table, and poor vegetation conditions.  The project is contingent on Inyo and LA exempting Well W375 from the on/off provisions of the Water Agreement.  It is that exemption that is the cause of concern for the three parties bringing the lawsuit.

“Over the past century, LADWP has aggressively pursued the destruction of our homeland for its benefit,” commented Big Pine Tribal Chairperson Virgil Moose. “The Tribe wants to see a benefit out of mitigation projects…not more negative impacts on our lands.”
The groups charge that LADWP’s action in adopting the Negative Declaration constitutes a violation of the California Environmental Quality Act because LADWP failed to prepare an environmental impact report.   An EIR is required because evidence presented by the public indicates that the Big Pine Northeast Regreening Project may have a significant impact on the environment.

Seems like Inyo County should be working with OVC, BP Tribe and the Sierra Club. It would be nice to see those that were elected “man up” against DWP’s mighty dollar.

Thanks to the entities who are working to protect our water resources and the resources that depend on it.

Well, if it turns out that the environmental document is adequate, I hope that DWP counter-sues for attorney fees and staff time against the plaintiffs. There are too many frivolous lawsuits in this world, at it is time that people be held accountable for tying up the courts.

Dear Jay, Why don’t you offer this advice to LADWP? Many now say their suit against Mammoth Lakes is frivolous since Mammoth secured and used their rights starting 50 years ago. Why would you assume the OVC, Sierra Club and Tribe have filed a frivolous suit? OVC and Sierra Club have a robust track record, especially on the Lower Owens River. Without those groups, we would not have had the re-watering of the river. Benett Kessler

Leave DWP alone already, their engineers know what they’re doing, DWP has done fine managing the Owens Valley water resources for the past hundred years, and They will for the Next hundred years…

Badfinger- I’d like to hear more about all the great things DWP has done for this Valley. I’m not seeing it.

Badfinger you can leave your Bias opinion in the DWP work truck or DWP office.
“Leave DWP alone already” Not in my life time!!!!!

What planet are you on Badfinger? Or should I say, where does your paycheck come from???

Tell that to the lakes, vegetation, animals and water tables in the Owens Valley!! The Valley is screaming for water….if DWP didn’t take the water in the FIRST place, we wouldn’t have to have a regreening project in our town of Big Pine!!!!

From,
Concerned For Our Future in Water Supply!!!!

This seems like borrowing from Peter to pay… Well, Peter I guess.