On Friday evening October 13, the Friends of the Mt Whitney Fish Hatchery, will be hosting an evening history program on this legendary Inyo County landmark.

The Mt. Whitney Fish Hatchery is celebrating its 100th birthday this year, and in honor of this milestone, the Friends of the Hatchery have put together a 40-minute presentation featuring rarely seen photograph and documents of the great Hatchery from the past 100 years. 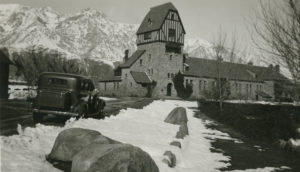 One of only two show hatcheries built in California, the Mt. Whitney Fish Hatchery is a testament to the successful blending of small town ethos with a large scale government program. When the hatchery was completed in 1917, it was the largest and best equipped Fish Hatchery in the United States. Many varieties of sport fish have been raised at the Hatchery over its 100 years, including the prized state fish of California, the Golden Trout. The productive operation has produced hundreds of millions of fish for California anglers.

After the slide show presentation, the Friends will also be featuring a book signing with author David Woodruff on the Friends new book, A History of the Mt. Whitney Fish Hatchery.