Six weeks ago, Krista G. got an early start as she headed home to Santa Cruz from a tour   of Death Valley. Driving southwest on State Highway 178, she passed through Searles   Valley and the Trona Pinnacles en route to Highway 395. About 3 miles from (395), as the morning sun brightened, she spotted an animal lying motionless in the middle of the roadway. Krista pulled to the shoulder, signals blinking a warning. A close look at the body revealed a small fox, alive but unconscious. 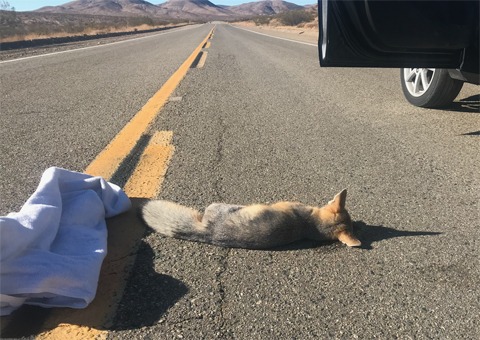 Kit fox found on Highway 395 lying motionless in the middle of the roadway, alive but unconscious.

At Wildcare Eastern Sierra, Director Cindy Kamler received an early phone call. It was Krista. She had googled for help and was seeking advice. Kamler gave her directions how to safely rescue the injured animal, keep it warm, dark and quiet, and then report back for further assistance.

Fortunately, Krista had both a small blanket and cardboard box in her car. Cautiously she wrapped the body in the warm blanket, tucked it into the box, and placed it on the sunny front seat in her vehicle. She called Cindy back.  Her planned route home had been south and then west to the coast and north to Santa Cruz.  The closest rehab facility was a very long drive away.  Krista chose to head north on (395) instead to Wildcare; two and a half hours later, she pulled up in front of the Center at Keough’s Hot Springs. Safe distancing, staff members removed the box from Krista’s car and rushed it to the medical exam area while Krista filled out an admission form.

Staff Cindy Kamler and Danielle Manriquez were surprised to discover that the fox was not the commonly seen Gray Fox but a smaller, endangered species called Kit Fox. These small foxes inhabit arid and semi-arid regions encompassing desert shrub, creosote, chaparral and grasslands.  The San Joaquin and Death Valleys hold most of the California kit fox population; few if any are seen north of that area. They are primarily nocturnal, spending most of the day in their underground dens.  Mostly carnivorous, their major prey is Merriam’s kangaroo rats; birds, rabbits and reptiles are less common prey.

Examination found a comatose female, juvenile or adult, motionless except for slight twitching of the head. No cuts, fractures or bruises were seen except for bleeding from the right inner ear.  She was treated for shock and given an anti-inflammatory for pain. Kit foxes do not drink water so she was given small amounts of sub-cutaneous fluid.

For the next 4-5 days, she was motionless, eyes shut.  Moving her into new positions was required every few hours, day and night. Nearly a week passed until she could lick blended raw meat from a syringe. She began to change position occasionally and, finally, opened her eyes and attempted to stand and move. A couple more weeks passed; she became more alert, her balance improved, and she could eat on her own. 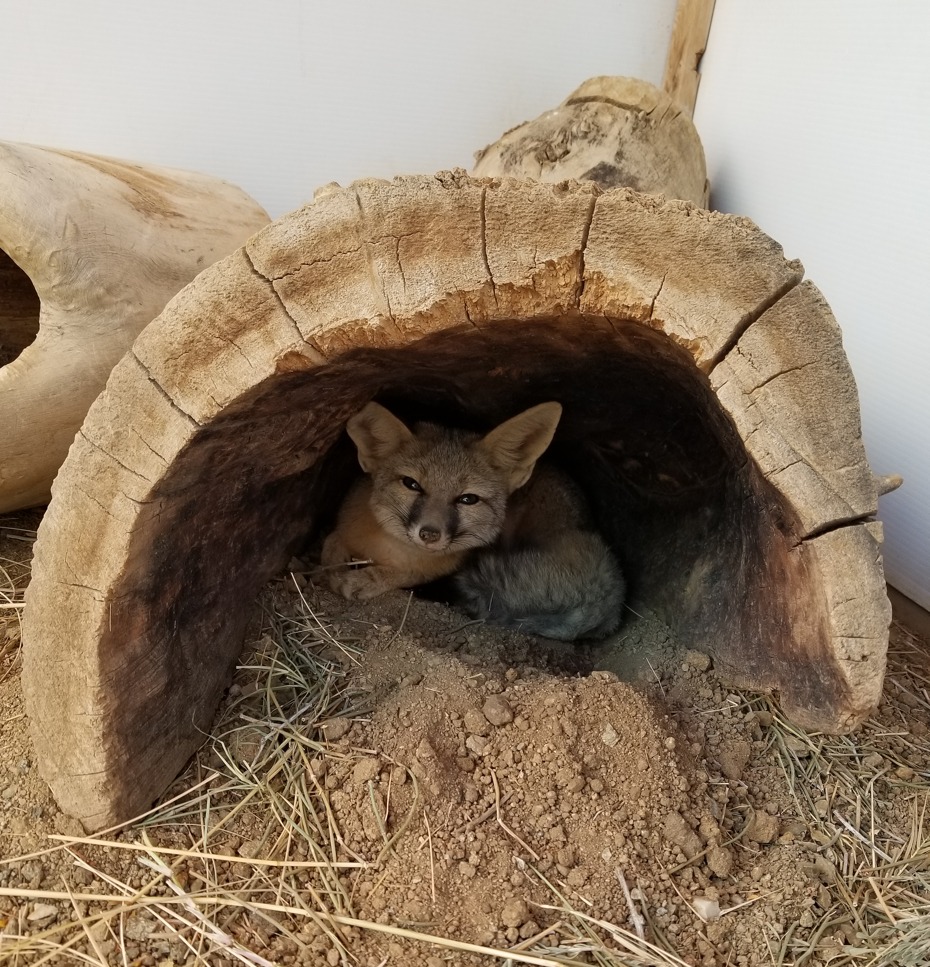 The Kit fox sleeps most of the day in her burrow and is active and eating at night.

She was first moved outdoors into a small dirt-bottomed, dig-proof  cage, sleeping most of the day in her burrow and active and eating at night. Currently, the kit fox is conditioning in a larger 8×8 escape-proof pen, eating well and becoming more and more wild. Jennifer, a Wildcare volunteer from Lone Pine, has explored the location near the spot where the fox was found. Our goal is to find a proper and safe release site, and that means we must learn as much as possible about Kit Fox behaviors.

Kit foxes normally forage alone but are not exceptionally territorial. They prefer to live in pairs or small groups of relatives. Different kit fox families can occupy the same hunting grounds, but do not generally go hunting at the same time. Dens are used during the year for daytime resting, escaping predators, avoiding extreme heat, preserving moisture, and carrying and rearing young. The dens are spread across the home range, and an individual fox can use more than 11 dens in a given year. They normally rest in dens during the day, but sometimes emerge to bask.  Kit Foxes will dig their own dens, but can also modify and use the burrows of ground squirrels and kangaroo rats.  Female foxes begin searching for natal dens in September and October.

We are happy to see that she continues to become more wild and alert, utilizing and exploring her territory.  She is digging her burrow deeper as the weather gets colder, and hides when she sees a person. In the next few weeks, we will evaluate her hunting skills by offering her an occasional live prey.  If all continues to go well, this beautiful Kit Fox will be released, returning to her home territory, wild and free.

[Dear SWM Reader/Listener: If you enjoyed reading this story of a wildlife rescue and would like to help with a donation or become involved as a volunteer, please contact Cindy Kamler at the listed number in the article.]

What happened to this little guy? Is he back home/

[UPDATE 1/26/2021: We heard back from the Wildcare ES Center today and there are plans to release the Kit Fox today! WES Director Cindy Kamler has promised a follow up report and we are looking forward to it. We will provide our readers and listeners with it as soon as… Read more »

According to Cindy’s 1/22 email, fox is fully recovered, and plans are being made for his return to his home

It was a good thing Krista wasn’t sheltering in place and was able to drive around Death Valley….it’s ok for some, but not ok for others…Santa Cruz people get a pass, LA people can go pound sand!

Mono Person No one has EVER been told or “ordered” to shelter in place. Nothing more than right-wing lies and spin trying to bash Governor Newsom. But if some choose to believe those lies,so be it. Maybe it’ll keep some of the super-spreaders down south from coming here to recreate… Read more »

What’s this? Good news with a happy ending. How refreshing. Thanks.