By News Staff on February 1, 2021 in Nature, News Releases 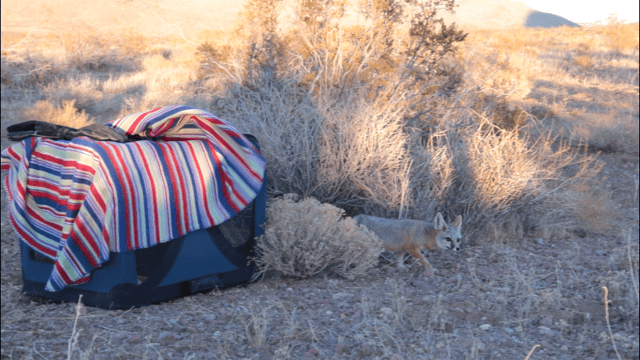 Kit Fox, recovered after 11 weeks of care at the Wildcare Eastern Sierra Center, is released back into the wild. (photo courtesy of Cindy Kamler, Wildcare ES)

We posted the story about it on our website back on December 23, 2020. It received a lot of attention on local news and social media. It was, in a way, a nice diversion from the mostly negative news on nation politics, the ongoing battle against Covid-19 and the virtual shut-down of most Christmas events and gatherings normally celebrated at that  time of year. 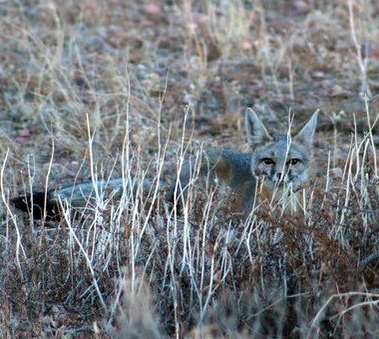 Kit Fox takes a last look back at its rescuers from Wildcare Eastern Sierra before taking off into the brush to live out its normal life in nature. (photo: Cindy Kamler, WES)

Now, as promised by the Director of Wildcare ES, Cindy Kamler, the Kit Fox was released back into the wild, recovered from its injuries and back to where it naturally belongs in nature.

There is, of course, no way of telling how it will do in the wild on its own, but it’s a safe bet that if the wishes and prayers of the many readers, listeners and viewers of Sierra Wave have anything to say about it, that Kit Fox will live a long and prosperous live.

Photo of injured, unconscious Kit Fox in roadway 11 weeks ago when found by a good Samaritan, who chose to save its life rather than pass on by.

This Kit Fox has already lived a pretty “lucky life” when you consider the kindness of a woman known only as Krista G, heading back home to Santa Cruz from a tour of Death Valley, stopped on seeing a small animal lying unconscious in the roadway. Rather than drive past it, she stopped to check on it, found that it was still alive, and then called around to find help for the small unconscious animal.

Help for injured or lost wild animals was not anywhere close at hand. So what did this amazingly kind and caring woman do? After reaching Wildcare Eastern Sierra on the phone and talking to Wildcare Director Cindy Kamler, she chose to not continue home, but turn around and drive hundreds of miles to personally bring the injured Kit Fox to the Wildcare Center in order to save it. It is an amazing act of kindness and generosity that we all can appreciate in these times when it seems that people seem to care so little about each other, our environment, our children’s future, and the lives of all the animals with whom we share this planet.

Thanks go to the wonderful staff at Wildcare Eastern Sierra who nurtured the injured animal back to health, as they do for hundreds and hundreds of wildlife found lost, sick or injured. In most cases, the animals are released back into nature to live out normal lives.

If you would like to help Wildcare ES with its mission through a donation or to volunteer to help at the center saving these wild animals, please contact Cindy Kamler at 760-872-1487.