The Mammoth Lakes Town Council went through its annual reorganization at the July 1 meeting. Mayor Wendy Sugimura stepped down from her post as Mayor which elevated Mayor Pro Tem Neil McCarroll to the top spot. Council member John Eastman was added into the rotation as Mayor Pro Tem. 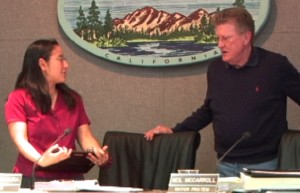 After receiving a recognition plaque, former Mayor Sugimura stepped away from the normal reorganization process.

“Usually the changing of the Mayor is done with little or no fanfare,” Sugimura told the community, “but since we have gone through so many controversies in the past year I thought I would recap the accomplishments we have made.”

Sugimura named accomplishments on her watch – reinstating air service, bringing Steve Searles back to work for the Town, and cutting building fees for single family homes in half. Observers said it seemed as though Sugimura were trying to neutralize the negative press she had received while holding the position of Mayor.

“Now, with great relief, I pass the title on to Neil,” Sugimura added.

Mayor McCarroll then took a few moments to present the goals he would like to accomplish while acting as Mayor over the next year. He hopes to complete Neighborhood District Planning by the end of the year; to revise the Town’s overall fee structure on or before Oct. 31; and to work with Town staff and developers to make the permit process transparent and quick.

The Mammoth Lakes Town Council re-organizes at the beginning of every fiscal year. The rotation is based on election results.

We work to provide daily news to all of the Eastern Sierra, in the tradition of Eastern Sierra News Service and the Sierra Wave. We bring you daily happenings, local politics, crime, government dealings and fun stuff. Please contact us.
View all posts by News Staff →
Missing Boater on Bridgeport Reservoir
Gun Shot Takes Life of Man “Burned Beyond Recognition” in Death Valley