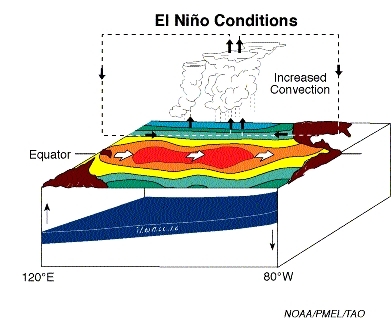 The cool weather of the past month has left local mountains, especially White Mountain, looking like winter. Some have speculated that there might be a connection to the weather phenomenon known as El Nino, which often brings wet winters to the Sierra.

Sierra Waves forecaster Dennis Mattinson says while an El Nino connection to the current weather pattern is far from certain, El Nino could in fact come into play next winter.

Mattinson explained that El Nino is the name that Peruvian fishermen call the warming of the ocean waters near the equator. This warming is coupled with a decrease in the prevailing winds that blow moisture west across the Pacific. Typically when this occurs, California and the southwestern United States receive more rainfall than usual, while Indonesia and Australia may see drought conditions.

[inset side=right]This year it appears that either El Nino is already underway, or possibly starting to form depending on whom you ask. [/inset]An El Nino is difficult to predict, Mattinson reports, but they appear roughly every three to seven years. Some times its easy, he says. Other times forecasters, dont pick them up until they have already started.

This year it appears that either El Nino is already underway, or possibly starting to form depending on whom you ask.The Scripps Institute in San Diego has already forecasted an El Nino this year. The caveat here is that they both can be wrong, Mattinson says.

Either way, Mattinson says well know more in August or so. A strong El Nino can bring the deep winter snow to the Sierra, but with the weather as of late, at least some of us wouldnt mind seeing a bit of summer first.

We work to provide daily news to all of the Eastern Sierra, in the tradition of Eastern Sierra News Service and the Sierra Wave. We bring you daily happenings, local politics, crime, government dealings and fun stuff. Please contact us.
View all posts by News Staff →
Klondike Heads To Inyo LA Standing Committee
Eastman Responds to Police Chief’s Press Conference