The Inyo County Board of Supervisor’s heard a presentation this past Tuesday’s on the county’s plan for a reintroduction and dedication, of Highway 395 to its original name of El Camino Sierra.

Replicas of the special signs first erected by the Inyo Good Road Club will be placed at various historic spots along El Camino Sierra-Hwy 395, in Inyo County.

El Camino Sierra is the name first given to this magical ribbon of blacktop by the Bishop based, Inyo Good Road Club back in 1910. The name was part of a marketing plan to draw the attention of Sacramento politicians and highway department officials to this lightly populated area of the state, in order to obtain a share of the first state highway construction bond, to build new roads in Inyo and Mono counties.

County Chief Administrative Officer Kevin Carunchio briefed the Board of Supervisors on the County’s recent efforts to resurrect and promote the name El Camino Sierra. Carunchio told the Board that banners had recently been placed at the north and south entrances of Lone Pine, Independence, Big Pine and Bishop, promoting the towns as being in “the Heart of El Camino Sierra.” Carunchio also stated, that Inyo County was in the process of placing new highway sounds at the county’s north and south borders, that also proclaimed “Inyo County-The Heart of El Camino Sierra.”

Carunchio went on, that the banners and signs along with a few other measures, were part of a phase one in the County’s efforts, and sought the Board’s approval to move forward with a phase two. The highlight of this next part of the El Camino Sierra promotional efforts would be to have interpretive highway markers erected and placed at various historic sites throughout Inyo County. Carunchio explained that the signs would be built in the shape of the historic markers first erected by the Inyo Good Roads Club back in 1910. Carunchio displayed a prototype of the new markers to the Board and the audience that was present. 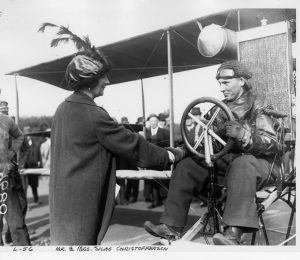 Silas Christofferson set a high alitude record for that time, and drew attention to the Inyo Good Road Clubs El Camino Sierra efforts, by flying over Mt. Whitney in 1914

During Tuesday’s presentation, the Inyo Board of Supervisors heard from local historians Ted Williams, Howard Walker and David Woodruff about how the name El Camino Sierra came about, and the measures taken to promote it, including the 1914 historic and record setting flight by intrepid aviator Silas Christofferson, who set a high altitude record for that time of 15,728’, by flying over 1,000’ above the summit of Mt. Whitney. The flight was part of the Inyo Good Road Club’s attention grabbing efforts.

Next Inyo County Assistant Administrator Rick Benson, read a proclamation that was recently passed by the California State Assembly, recognizing the historic designation of Highway 395 where it traverses Inyo County, as El Camino Sierra, and applauding the County’s ongoing efforts to reaffirm it. The proclamation further recognized the tireless efforts of the Inyo Good Road Club, who were able to bring then Governor James Gillett to Inyo County, to officially designate the highway as El Camino Sierra back in 1910.

Graphic designer Elizabeth Glazner from Bishop presented to the Board, the special trade-marked font and logos that were created, and that the County would be using in its El Camino Sierra campaign. Board of Supervisor administrative assistant Darcy Ellis told the Board that the County was making the text and logos available to businesses and organizations that wished to join the County in the promoting of El Camino Sierra designation for Highway 395.

If you have a business and would like to be involved in the County’s El Camino Sierra promotional efforts, or just learn more about it, you can contact Darcy Ellis at (760) 878-0373.

El Camino Sierra, Inyo County Board of Supervisors, US Highway 395

I lived in Bishop for 20 years and had to move 2 years ago. To be able to watch Bob Todd giving the news is absolutely wonderful. I like keeping up with what is going on in my real home.

Bought this book last month on Amazon… Been visiting the Eastern Sierra for over 60 years … been exploring …been fishing … been eating … been friending .. I DO RECOMMEND THIS BOOK… and KUDOs to the author.. I learned new things I found a lot was left out and… Read more »