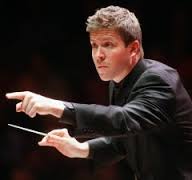 Eastern Sierra Symphony produces a week-long festival featuring two full symphonic orchestra concerts as well as other activities every August, a tradition that began back in 1978. The Board brought on Kreston, Concert Master of the Pasadena Symphony, three years ago as Executive Director after long-time conductor Bogidar Avramov retired. Kreston, along with the board, began a search for a new Artistic Director. After two previous candidates in 2013 and 2014, Outwater joined the symphony as Guest Conductor last year and was subsequently offered the position.
“We are thrilled to have Edwin join us,” stated Kreston. “He is not only a brilliant young conductor, he has a following that we are confident will help us continue to build the Eastern Sierra Symphony into a world class destination event.”

In addition to his position at Kitchener-Waterloo, Outwater is the Director of Summer Concerts at the San Francisco Symphony (SFS) and regularly guest conducts the Chicago and New World Symphonies. The San Francisco Classical Voice stated about Outwater that he is “headed for a top-tier future.”

As those who attended last year’s concert learned, he is a visionary programmer and has the ability to bring context into the concert hall, connecting with audiences and including repertoire beyond the mainstream. In the United States, Outwater has also conducted the New York and Los Angeles Philharmonic Orchestras, as well as symphony orchestras including Baltimore, Detroit, Houston, and Seattle.

In Canada, he has led the National Arts Centre Orchestra and the symphonies of Toronto, Calgary, Edmonton, Winnipeg, and Victoria. Other international appearances include the Tokyo Metropolitan Orchestra, BBCNOW, the New Zealand Symphony, Adelaide Symphony, Malmö Symphony, Mexico City Philharmonic, and Hong Kong Sinfonietta, among others.

The public is invited to join Outwater, along with Kreston and the Board of Eastern Sierra Symphony, at a reception on Tuesday, April 5th from 5:00 to 7:00 pm at Edison Hall, 100 College Parkway. He will be available to share some of his plans for the future with all those who attend. To RSVP contact 760.935.3837.

Eastern Sierra Symphony, consisting of professional musicians and pre-professional students of the highest caliber, is a 501c3 non-profit that is funded through ticket sales for its August concerts (in 2016 the week of August 8-13), as well as the generosity of donors, grants, and some public funding. Donations are welcome and may be sent to P.O. Box 7710 in Mammoth Lakes, CA 93546 or call 760.935.3837 for more information.