In a taped interview marred by static in places, Inyo Sheriff’s investigators tried to uncover the truth about a brutal murder. The interview of suspect Edward Keller, played in court yesterday, revealed that someone had hit the victim, James 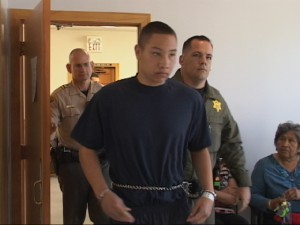 Williams, so hard with a weight bar that it took off one of his fingers before he was killed. District Attorney Art Maillet presented the sheriffs interview that included a confession by Keller. Judge Brian Lamb held the teenager to answer for murder.

For a couple of hours yesterday, sheriff’s officers and family members waited outside the court building in Independence. Deputies performed security scans on those who entered. Inside the court lobby were family members of Keller. They tried to keep their conversations light-hearted even as the specter of terrible tragedy hung in the background.

17-year-old Edward Keller, Jr. sat quietly in court for his preliminary hearing to determine whether he would face a murder charge. Keller was dressed in prison blue with shackles on his wrists and ankles. He walked the court hallway at one point.

His attorney, Nolan Del Campo of Fair Oaks introduced a motion to suppress what he called a “somewhat coerced confession” from his client to officers. The taped interviews with Keller were played for the court.

Though the audio was scratchy, officers could be heard probing Keller to tell them what happened the night of November 26th when the 29-year-old Williams was killed. Keller could be heard describing his cousins getting together with a half gallon of Captain Morgan rum and beer before that.

Keller, who was not necessarily a suspect at the time of the interview, told of a drunken scene that turned violent. He claimed that someone else hit James Williams hard several times with a weight bar, but in the second interview Keller indicated he did kill Williams because he had beat up his cousin.

Judge Brian Lamb denied the motion to suppress the taped confession and he found sufficient cause to believe a crime occurred and that Edward Keller, Jr. had committed it. Keller was bound over for trial. He will appear for a court arraignment April 27th.

We work to provide daily news to all of the Eastern Sierra, in the tradition of Eastern Sierra News Service and the Sierra Wave. We bring you daily happenings, local politics, crime, government dealings and fun stuff. Please contact us.
View all posts by News Staff →
Christiana Sentenced in Mono- Inyo Arson Charges Remain
The Not Surprising Squabble Over Development in Mammoth Lakes