“They run over people who suffer in silence so they can save money for their bottom line.” That’s what Rick McManis at 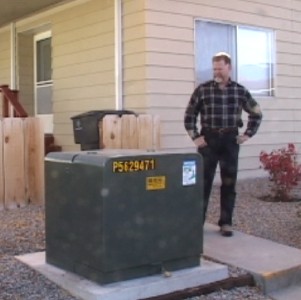 Highlands Mobile Home Park in Bishop said about Southern California Edison. This week, the utility cut off the power to most of the 200 residents and left it off late into the cold night.

Edison sent cards to residents to say that crews would perform maintenance on Wednesday and would cut off power between 8am and 6pm. The good news, Edison officials said, was their crews would complete a major upgrade of the power system in Highlands where power outages have come often.

In fact, Edison turned the power off on Tuesday, leaving many elderly people in the cold. We received reports of 90-year-olds huddled under blankets as they waited for their power to come back. Inyo Sheriff Bill Lutze had sent patrols to the park to check on elderly residents.

Even after that, Edison repeated the horrible conditions Wednesday night. Temperatures inside homes got down in the 30s. Elderly dependent on oxygen had to go without. Reports said that in one case a 99-year-old resident, walking around in the dark, fell and broke her shoulder. She remained hospitalized.

Rick McManis and his wife Vicky had to leave their home and stay in a motel to escape the cold. McManis said that in addition to the thoughtless treatment of people, Edison crews tore up yards and plunked down large, high voltage transformers right in front of houses.

Crews also reported a hazmat spill from a transformer that further delayed turning power back on. They had to bring in a crew from Bakersfield to handle it.

Why did Edison turn power off late into the night in November? Edison’s Dan Brady said it just worked out that way.

We work to provide daily news to all of the Eastern Sierra, in the tradition of Eastern Sierra News Service and the Sierra Wave. We bring you daily happenings, local politics, crime, government dealings and fun stuff. Please contact us.
View all posts by News Staff →
Corpora Files Motion to Leave Leplat Case
The Victim Pays