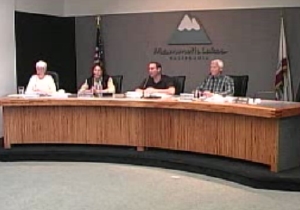 The economy, local business and the Mayor’s travel expenses – The Mammoth Town Council heard about these and related issues at their most recent meeting.

First, Mammoth Lakes Chamber of Commerce President Jack Copeland pointed out that the slow season will hit town soon. He said the six weeks between Easter and June are an opportunity to make progress. Copeland said, “We will have to work hard to get people here and beef up the focus on service.” He said everything in town will be on sale – lift tickets, lodging, ski equipment and clothing.

Copeland pointed to the need for better customer service and said visitors usually get “a formal or no welcome.” He said the town has to “bump it up a notch.” Copeland said the Chamber will hold workshops for business owners with the message that they need to “Treat everyone like a local.”

Speaking of locals, Tim Flynn of the Mammoth Lakes Contractors Association expressed his disappointment that the Town Council dropped the 50% cut of building permits for single family homes. Flynn said he hoped they would re-submit this issue for a new vote and consider it an economic stimulus.

Flynn said the Town just lost three high-salaried people whose pay adds up to about a half million. He said, “Don’t tell us you’re going to hire another manager.” Flynn said if the Town keeps fees down it will entice people to develop homes.

Mayor Matthew Lehman assured Flynn that the Town is running at “zero profit with no reserves municipality.” He disagreed with Flynn’s view that government is hiring people to do nothing. Said the Mayor, “They’re pushed pretty hard.”

Speaking of Mayor Lehman. He put an item on the agenda to be reimbursed $199 for his travel expense to go to the San Diego Marathon and participate. This is a sister event with a later marathon in Mammoth Lakes. Lehman contended he was raising awareness of the Town.

The Council tried to see if Mammoth Lakes Tourism could pay Lehman, but Town Attorney Andy Morris said there are restrictions on a third party paying. He said it would be considered a “gift to the Town.”

In the end, the Council approved reimbursement to Lehman. The vote was 4 to nothing.

As the long-ago spokesperson for MAUS, this article caught my attention when it popped up in a random search.
Not surprised to see that politics around the mountain haven’t changed much over the years. Good luck.

One of our website readers just reminded me that there were two recalls in Mono County in the 80s. Mono Supervisors Mike Jencks and Al Lydecker were successfully recalled a group called MAUS – Mono Against Unresponsive Supervisors. Jencks and Lydecker crafted development standards that essentially were designed to “shut… Read more »

too much time and effort being spent watching the criminals running the town into the ground,everything else is falling apart as expected

Have any of you walked around town very much? If you really look at the town, it looks like an uncared for place. There’s trash and debris every where. There’s dilapidated buildings and neglected areas all over town. Little places that could be cleaned up in a few hours that… Read more »

Nice work if you can get it

I totally agree with you droneboy. A major flaw in the system is that the only credentials our elected officials require to end-up calling the shots for the entire community, is that they received the most votes. And realizing the power the elected official has, and knowing that it would… Read more »

Benett Kessler
Reply to  Nice work if you can get it

If you think the Mayor is in conflict, why don’t you object. There is a Town Attorney sitting there during all meetings, and Council members do have to recuse themselves if they are legally in conflict, which has to do with ownership, location and associations. Criticism is easy. Facts are… Read more »

Now, Benett, you must have noticed how often the meetings are closed to the public nowadays. Nobody really knows what is said behind closed doors in council chambers and what deals are being made. The elected officials are very aware that the only time the council chambers are full is… Read more »

Ah, how I love this means of communication … Okay, I’ll try it this way … Dear Benett, in your many years of covering The Bureacratic Beat, has there ever been a situation in your recollection where the citizens of Inyo or Mono County made enough noise, or drew up… Read more »

Yes. In Inyo County sometime in the late 70s or early 80s. It was over the water issue. The re-call candidate or candidates,
I believe, lost.
BK

This, of course, is exactly what they want. A community driven to apathy by shear exhaustion.

Why not a lottery system?
Reply to  Ken Warner

Ken, And two on the council didn’t even have to kiss one baby as they ran unnopposed. People today need a keen awareness of the interdependent nature of everything. Everything is of interdependent nature. I feel many problems, especially the man-made ones are due to a lack of knowledge about… Read more »

I was reacting to and commenting on your news story Benett; sorry. My point was that the Mayor should know better; that he shouldn’t even have made the request in the first place, as a matter of decency, in light of the Town’s fiscal situation. Where did I say he… Read more »

I think it should be clear by now, that other than the customary insulting political trash talk, this mode of communication can easily be construed as something other than it was intended.
Like an electronic Tower of Babel.

Thanks
Reply to  Benett Kessler

Thank you Benett for taking the time to clarify a “rhetorical question.”
It officially adds support to the comment of how much in the dark We the People are today in local and other forms of government.

So, Mayor Lehman has the public pay for his airfare so he can run in a marathon in San Diego? Sorry, but I must ask, in the words of the great Joseph Welch, “..at long last, sir, have you left no sense of decency?” And P.S. to Town Attroney Morris:… Read more »

Why not try what Bennett Kessler says and object? (Yeah. Right)

My guess is, like most citizens, they only object when something hits close to home for them. And don’t think for a moment the elected officials don’t know this.