Inyo County’s stunning landscapes, whether towering mountain peaks or sprawling deserts, can quickly become the focus for anyone trying to explain the county’s many charms. But the cast of characters that have paraded through the county’s history can be just as interesting as the landscapes they inhabited. 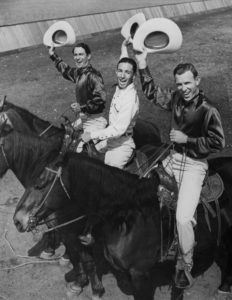 The 2019 Eastern California Museum calendar puts those hearty Inyo County residents in the spotlight. A quick glance through the calendar’s photos confirms the theme, “You Meet the Most Interesting People in Inyo County.”

The cover shows a rather arresting scene: A dead body in the dusty street being completely ignored by six people who are alternately looking at their watches, talking among themselves or otherwise not looking at the “dead guy.” It was not a scene of callous disregard for mankind: It was a scene from a long-ago movie shoot in Lone Pine.

Among the featured photos is a shot of a sturdy group of Boy Scouts on a Sierra outing, circa 1930. Men in their Sunday best lounging on the porch of the Mairs Hotel in Independence in the early 1900s put on a good face for the camera. A trio of handsome rodeo cowboys is shown with big smiles, big waves and shiny shirts. 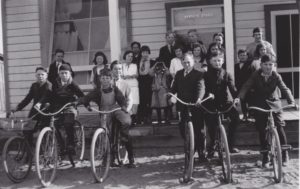 Laborers who toiled to build the Los Angeles Aqueduct are a grittier group, and are pictured in their work clothes while standing on a huge power shovel. Showing a bit of adolescent grit are the Lone Pine boys and girls that make up a somewhat intimidating “biker gang,” as they straddle their bikes and gather on the steps of the building housing the studio of photographer Allan Ramsey.

Putting the best face on a tough situation was the Manzaknights baseball team, which played “America’s pastime” while incarcerated in the Manzanar War Relocation Center. The 1911 state election gave California women won the right to vote, thanks in part to the work of “suffragettes,” such as the Bishop Piute Tribe women shown in an Andrew Forbes photo. 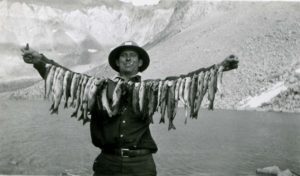 After a good day of fishing, it’s hard not to show off a little bit.

And yes, there are fishing photos. Specifically, the three-step Inyo County fishing trip: Step One, praying you will catch fish, epitomized by Lone Pine’s Father Crowley hosting the “Fishermen’s Mass.” Step Two, going fishing, in this case in a vintage, wooden boat on, where else, Crowley Lake. Step Three: Showing off your stringer of fish for the entire world to see.

School kids, hikers, a trail crew, marching bands and other interesting Inyo County people are also featured in the calendar.

The 2019 Eastern California Museum Calendar is available at the Museum, 155 N. Grant St., Independence, for $10; if ordered over the phone at 760-878-0258 and mailed, the calendar will cost $13 to cover postage and tax. Credit card orders are also accepted over the phone. 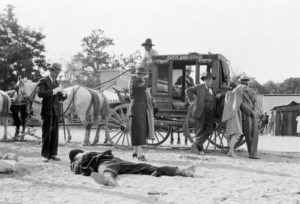 No one seems to be concerned about the dead body, so we assume this was a break in the shooting, er, filming of what must have been quite a mystery movie in Lone Pine